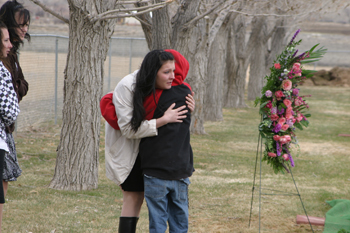 RANGELY I Family and friends said goodbye Tuesday to Lynea Osborne.
“When she came into the world, we thought our lives would never be the same. Now that she’s gone, we know our lives will never be the same,” said Lynea’s grandfather, the Rev. Robert Tucker, who spoke to an overflowing crowd that filled the sanctuary at Bible Baptist Church.
Lynea died April 1 after going into cardiac arrest March 27 at her home in Rangely. She was 16.
“Two weeks ago, the furthest thing from my mind would have been attending Lynea’s funeral, but here we are,” her grandfather said. “God had a different plan.”
The Rev. Tucker referred to Tuesday’s service as Lynea’s graduation, but in a spiritual sense.
“We had already made plans to come to her graduation next year,” he said of his granddaughter, who was a junior at Rangely High School. “We didn’t plan on coming to this graduation. But, in all reality, this is a greater graduation than the one where she would’ve walked across the stage, because she walked into heaven.”
The Rev. Jasper Whitson, the pastor at Bible Baptist Church, began Tuesday’s service.
“You have shown great love, care and compassion for the family, by your presence,” Whitson said.
In his opening prayer, the church’s pastor said, “We especially ask your comfort and peace for the family. For a mom. For a dad. For brothers. … Use this service to provide some comfort. Use this service to celebrate the life of Lynea.”
And there was plenty to celebrate.
Lynea was active in band, choir — she used to sing the national anthem before sporting events — volleyball and 4-H. Her goal was to go to college and study to become a veterinarian. Most of all, perhaps, she was known for her smile.
“She almost always had a smile on her face,” Whitson said. “A beautiful smile speaks volumes, and most certainly Lynea’s did.”
Whitson said it was hard to understand why someone so young “had to leave us.”
“Life is short, but in the case of Lynea, all would have to say it’s too short,” Whitson said.
Another Rangely pastor, the Rev. David Morton, of First Baptist Church, talked about watching Lynea grow up.
“She was a charming young woman. She was a person of character,” he said, “but she wasn’t perfect.”
Morton went on to tell humorous stories about how Lynea would sneak a can of pop into choir practice, which was forbidden, and how she would use her cell phone to send text messages during school, which also wasn’t allowed.
Morton tried to put Lynea’s loss in perspective.
“Not to say it glibly, but she’s in a better place,” he said. “It’s a fact.”
Her grandfather, the Rev. Tucker, who was with Lynea at the hospital when she died, concluded, “I guess the bottom line … Lynea’s life wasn’t long, but it was complete. We held her hand, she held our hearts. Thank God it’s not goodbye. We’ll meet again.”

RANGELY I The Big Ridge Fire was reported Monday at 5:30 p.m. The fire is located six miles southeast of Rangely on Bureau of Land Management public land and estimated to be 37 acres. Rangely […]

Firefighter of the Year

The Rangely Rural Fire Protection District presented their 2020 service awards to its members in December. Notably, long time Rangely resident Travis LeBleu was named Firefighter of the Year. LeBleu has been on the Rangely […]