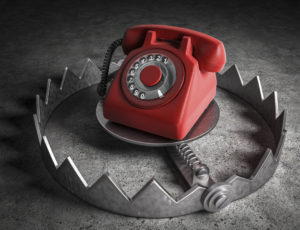 MEEKER | A Meeker woman fell victim to a phone scam last Monday and lost several thousand dollars. She received a call stating she was due for a “rebate” on computer tech and was that to receive the money, they needed a bank account number. She then received a second call saying there had been a mistake and they needed a different bank account number. She reported losing close to $3,000 as a result of the scam, and called the HT so other residents could be warned.

Anyone who thinks they may have been caught in a scam should contact law enforcement. Although the likelihood of solving these kinds of cases is slim, the Sheriff’s Office will pursue the investigation.

“Television has portrayed that law enforcement can solve nearly any case regardless of the circumstances at hand. In all reality frauds such as the one mentioned above and the one you described generally have a low level of solvability,” Rio Blanco County Sheriff’s Office Lieutenant Muxlow said via email. “Unfortunately, when the information comes back it is often a fake name, with fake account information which results in an unsolved case, or a cold case that eventually expires based on the statute of limitations.”

Frauds and scams are being perpetuated via the telephone, email and social media, and scammers have developed new ways to prey on their victims, such as using fake telephone numbers with a 970-878- prefix, or hacking Facebook accounts.

“The number one way to avoid scams is awareness to scams,” said Muxlow via email. “If a person has even the slightest inclination that the situation doesn’t seem right, it’s usually because it isn’t.”

“Most recently a member of our community had been approached through Facebook by a lifelong friend (who is also a member of our community).  Our victim was told that her help was sought in a grant process.  Our victim was then asked to purchase Google Cards and ITunes cards.  Once the cards were purchased the victim was to take photographs of the bar codes and send them to the suspect.  As you may have guessed the victims lifelong friend had been hacked by a scammer and the destination of those funds remains a mystery,” Muxlow said.

Meeker Police Chief Phil Stubblefield said his department gets calls every week from citizens about different scams, adding that he gets at least two scam calls a day on his own phone. “Cell and phone companies could do more to block and stop these calls,” he said via email. “I wish we could do more.”

What steps should you take if you think you’ve been scammed (after contacting local law enforcement)?

If there is any question that a scammer has obtained credit or debit card numbers, bank routing numbers or other banking information, call your financial institution immediately to place a hold on all account information. “Nearly all banks now have a fraud department.  When the banks fraud department gets involved the victim has a much better chance of recovering those funds, most of the time,” Muxlow said.

Most scams result in identity theft. Run a credit check on yourself at least once every six months to see if your identity has been compromised. If you find yourself a victim of identity theft, file a report with the Federal Trade Commission (www.ftc.gov), who can assist you in resolving identify theft issues.

Listen to this post August proved to be a productive month for K-9 Remmy. During traffic stops and traffic complaints K-9 Remmy and team confiscated Whippets (nitrous oxide found in small metal canisters used in […]

Listen to this post RANGELY | A body was discovered in the White River yesterday approximately four miles west of Rangely at the Texas Beach area. According to a press release from the Rio Blanco […]