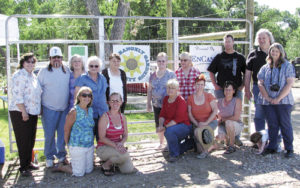 The Rangely Community Gardens (RCG) held an open house last Saturday to honor the founders of the project, started in 2009 and recognize the many contributors who donated to the project. RCG president Lisa Hatch welcomed everyone to the ceremony and Rangely mayor Paula Davis recognized Peggy Rector and Phyllis Henley as founders of the project. Henley traveled more than 1,250 miles for the ceremony.“It is their passion and we still recognize their vision,” Hatch said of the two founders. The Town of Rangely donated the three acres and financial and in-kind contributions from Urie Trucking, Rangely True Value Hardware and EnCana were publicly recognized by Hatch. “We still have a lot to do.Hatch also thanked stewart and Norma Hood for their endless hours of work.Pictured above are; Lisa Hatch, Raymundo Gonzalez, Norma Hood, Linda Berry, Peggy Rector, Phyllis Henley, Gaila Bell, Jesse Risner, John UrbanikBottom: Carla Slagle, Melissa Sheridan, Sharon Stewart, Tami Dahle, Ingrid Reed, Barbara Urbanik¬† (child between John and Barbara Urbanik is their grand-daughter Danielle Urbanik).

Plenty of growing season ahead at Rangely Community Gardens

Listen to this post RBC I Sure, it’s July, which to some feels like summer is half over. Strictly speaking, however, the gardening season is still young, which leaves plenty of time to join Rangely […]