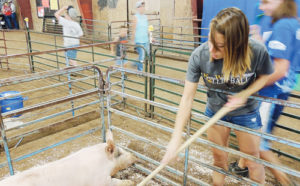 Cleaning the pig pen, keeping food and water on hand, washing down and cooling off the pig and shining it up for show were all a part of showing 4-H and FFA pigs at the Rio County Fair this past weekend. Above, Leslie Hernandez of Rangely cleans the pig pen for her friend, Brittney Babineaux, pictured in a blur at the far right. 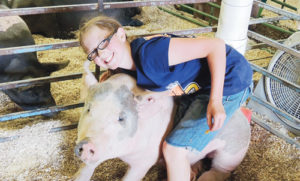 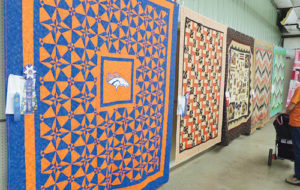 Most Coloradans are cheering for the Denver Broncos to be champions this upcoming NFL season, but the Broncos were lucky for Ellen Bondreax. who won the ribbon for Grand Champion Quilt in Class 40.2. Next to the blue and orange is a quilt of Bev Brennan, who won Grand Champion Quilt in Class 40.3. Many beautiful and colorful quilts were entered in the fair competition. 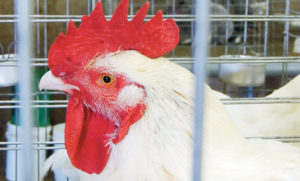 This rooster didn’t look all too pleased to be in his metal pen, but he was joined by other chickens, turkeys and fowl in the poultry division of the 4-H/FFA-driven portion of the annual Rio Blanco County Fair. First-place chicken showmanship ribbons went to Sydney Hughes in the senior class, Mary T. Baylie in intermediate class and Susan Gillard in junior class.

Several girls and boys from Rangely and Meeker took home ribbons and honors from the “Rio Blanco County Has Talent” competition on Friday evening at the Rio Blanco County Fair. A wide variety of acts kept the spectators smiling and laughing in their seats. 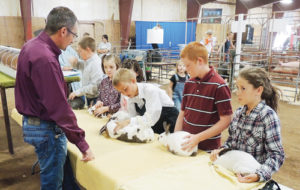 These five rabbit raisers from around Rio Blanco County are seen taking part in the junior showmanship class for rabbits. All kinds and colors of rabbit were on display and being judged in several categories. The young man in the white shirt, in the middle, was awarded the Grand Champion Showmanship ribbon in rabbits. 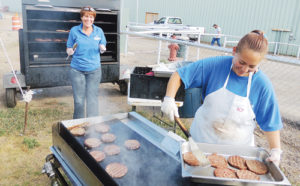 The 4-H pork barbecue, slated for July 31 at the Rio Blanco County Fair, turned out to be grilled hamburgers instead, and heading up the production on the burgers was Brothers Custom Processing co-owner Sharla Satterwhite, center, and daughter Angie Satterwhite, right, who was flipping the burgers for the many chow hounds taking part. Brothers provided several meals during the fair outside and inside the new 4-H building.