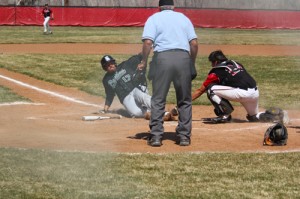 RANGELY I The Rangely Panthers moved to a 2-7 overall record and 1-3 in the league after losing a doubleheader to Paonia on their home diamond last Saturday.
“This isn’t unfamiliar territory for us,” head coach Paul Fortunato said of his team’s record. “Last year we started 0-7 and finished the year very well. It’s getting better and I am confident we will make that turn-around.”
The Panthers lost 10-20 in the first game and 7-9 in the second to the Eagles from Paonia.
The Panthers fell behind by 13 before scoring 10 runs in the fourth inning, only to have the Eagles counter with five and two more in the next inning to end the game after five innings of play.
In the second game, Rangely trailed 0-3 after the first inning but scored one in the second and three more in the third to take a 4-3 lead. In the fourth inning, they scored one more and Paonia took back the lead with three runs of their own. Neither team scored in the fifth inning, but Rangely added two in the sixth only to have the Eagles scored three to win 9-7.
“We are struggling right now, but we have some bright spots starting to come around,” Fortunato said. “Sophomores Kelton Elam and Josh Bolding have been playing extremely hard and are starting to make a big difference for the team. Freshmen Jesse Powell and Kaulan Brady are starting to become more comfortable in their varsity roles as well.”
The varsity will play a doubleheader in Hotchkiss and the jayvee will play a doubleheader in Rifle on Friday.
“We have a great core of returning starters that are beginning to produce, and, with the help of the younger guys, we are going to turn it around and get back on the right track.”

Listen to this post The Rangely Panthers baseball team (7-7) is currently on a seven game win streak with wins over Unitah, Rifle, a doubleheader against Meeker and win against Grand Valley.

Listen to this post The Rangely Panthers celebrate after beating the Hotchkiss Bulldogs 7-6 in the first game of a doubleheader Friday. Senior Chad Bolding is pictured getting a hit for his team. The Panthers […]

Listen to this post RANGELY I The Panthers recently completed one of their best baseball seasons in recent memory, just falling short of advancing to regionals. Still, there was plenty to celebrate for league-champion Rangely. […]