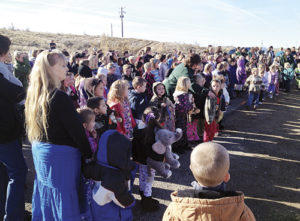 RANGELY I A patch of dirt adjacent to Parkview Elementary School’s west parking lot is home to a new school sign unveiled Tuesday morning.
The steel sign, made up of four 4-foot by 8-foot segments and one 4-foot by 4-foot centerpiece, serves a dual purpose, Rangely High School vocational/agriculture instructor and project coordinator Crandal Mergelman said. It clearly marks the former middle school building as Parkview while keeping the no-parking area free of cars.
The sign was also created almost entirely by students in Mergelman’s agriculture mechanics course at Rangely High School.
“A lot of these are hands-on students, very work-oriented students,” Mergelman said. “When it comes to working with metal and welders, painting and design, I couldn’t have asked for better…They just really excelled for me.”
Flanking either side of the centerpiece Panther designed by RHS senior Kelsey Prosser are scenes reminiscent of home and school: a child swinging from a tree, a teacher at a chalkboard, and children stacking blocks, among other designs.
Prosser, whom Mergelman called the “main design coordinator,” said the creative aspect drew her to ag mechanics in the first place.
“I love it, the ‘artsy fartsy’ side of it,” Prosser said, laughing. “I was really proud of how (the sign) came together. I like most the…different designs from panel to panel. None were the same and kind of represented Parkview in general, the idea of playing and being a kid again.”
Mergelman said that more complex student projects can mean that instructors end up helping with or doing much of the work. That wasn’t the case for the sign project, which began in September and required dozens of computer and shop hours using Photoshop and the school’s new plasma cam, a computerized cutting table.
“I had in the back of my head that as the teacher, I’d have to step in and help with a lot of it,” Mergelman said. “But I really was able to just be the teacher, be an observer, while they did it themselves. I would explain how to bend pipe, get pieces of metal into the plasma cam, and they just took it and ran from there.”
The learning curve varied for students, Mergelman said, but everyone took something from the project. Students led by senior William Scoggins used math to determine how much space they had to work with. They created and adjusted the design using Photoshop and Illustrator, then imported it into the plasma cam’s software.
Once designs had been cut into the quarter-inch plate steel—another learning curve, since the first steel they used was too thin—it was time to bend the pipe and weld the steel sheets to the frames.
Mergelman’s crew then cleaned and painted the structures before hauling them to Parkview last week, where Aaron Dembowski and Bill Lasseter taught a dozen students how to level tubes, pour concrete, attach the frames, and plant them in the ground.
“Bill Lasseter said he had never seen kids fighting over what part they were going get to help with,” Mergelman said.
Rangely School District maintenance director Alicia Cushman, who saw the metal artwork at the entrance to Elks Park and thought students could do something similar, suggested the project to Mergelman this summer. Cushman’s maintenance budget, helped along by the sale of metal parts the department no longer uses, funded the project.
“I just think it’s cool that the kids can do something like that,” Cushman said. “They can look back on this in 15 or 20 years and say, ‘We built that. We made that.’ It’s something constructive they can put their energy into.”
That’s why Cushman and Mergelman are already thinking about future projects that could take shape, and why Mergelman is excited to see the sign spark students’ individual project ideas.
“I thought it would look good, but it turned out a lot better than I thought,” Prosser said. “Our original plan was pretty basic, just a general idea. Once we got into it we thought, ‘Wow, we can really add a lot more design.’”
In addition to Prosser and Scoggins, the other students involved in the sign’s creation were Kelby Bell, Heath Peters, Cheyenne Steele, Shelby Neiberger, Wes Goddard, Lucas Heinle, Ryan Wilczek, James Rogers, Bryson Palacious and Chad Bolding.
“The kids have worked unbelievably hard on it and they’re very proud of what they have done,” Mergelman said. “At first it was hard, but once the kids kicked in it just happened. It came together.”

Rangely Supt. will resign at end of year

Parkview Elementary School teacher Tena Tolley guides Pre-K students in examining the affect vinegar has on an egg compared to water. Students participated in a four-day experiment where many questions and hypotheses were discussed.