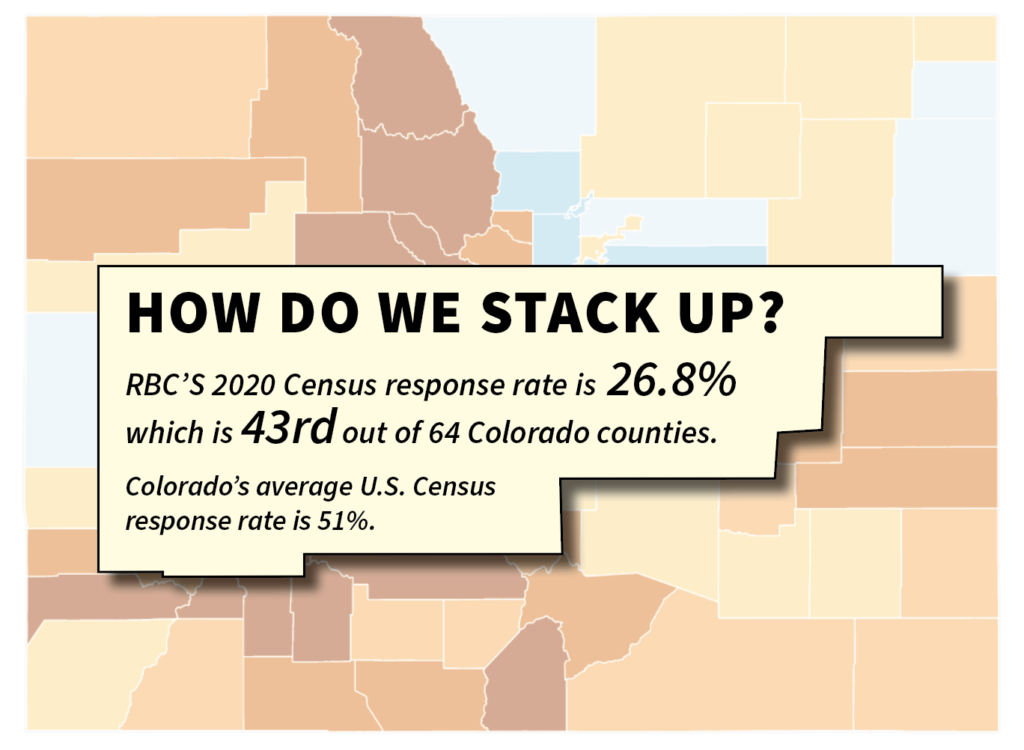 RBC | Every 10 years, since 1790, the United States government has conducted an official census of the population. Everyone living in the United States and its five territories is required by law to be counted. Accurate census counts provide crucial information for counties, states and the federal government, and provide data that will affect our communities for the next decade.

As of April 11, Rio Blanco County was ranked 43rd out of 64 counties, with just 26.8% of households responding. Douglas County was first with 63.2% and Jefferson County was second, with 62.2%. Trailing all 64 Colorado counties were Hinsdale with 5% and Grand with 6.1%.

Article 1, Section 2 of the U.S. Constitution empowers Congress to carry out a regular census in order to establish an accurate count of the population and use that count to determine Congressional representation. According to census.gov, “Enshrining this invention in our Constitution marked a turning point in world history. Previously censuses had been used mainly to tax or confiscate property or to conscript youth into military service. The genius of the Founders was taking a tool of government and making it a tool of political empowerment for the governed over their government.”

The first U.S. census was conducted in 1790 under the leadership of then Secretary of State Thomas Jefferson. U.S. Marshals were commissioned to conduct the census, which had a total of six questions.

History buffs and genealogists are familiar with those hand-written census forms that asked citizens to list their names, ages, country of origin, household members and relationships, and occupation.

As the decades passed and the nation grew and changed, additional questions were added in an attempt to provide a better snapshot of the changing demographics of the country.

Census data is used to inform federal funding for hundreds of programs, including hospitals, fire departments, Medicaid, Head Start, block grants for community mental health, and Supplemental Nutrition Assistance Program (SNAP) data. Where federal funding dollars go for highway construction, education, and more. Without an accurate census count, communities can be underrepresented when it comes to receiving those federal funds.

U.S. Marshals aren’t out collecting census information anymore. In more recent years, the U.S. Census Bureau has hired census takers who physically visit households and collect answers to census questions. Mailed forms, telephone reporting and — for the first time — online options are available this year. In response to the COVID-19 pandemic, the  the Bureau has temporarily suspended its field operations and are encouraging citizens to respond by mail, phone, or online. Paper questionnaires are due to be mailed in early April.

All valid Census Bureau websites have .gov at the end. My2020census.gov is the direct address to respond online.

The Census Bureau does not ask for information via email.

The Bureau will never ask for your Social Security number, bank account or credit card numbers, anything on behalf of a political party, money or donation.

If someone does come to your door to collect a response, verify their identity: they should have a valid ID badge with their photograph, U.S. Department of Commerce watermark and expiration date. If you are concerned about their identity, call 844-330-2020 to speak with a Census Bureau representative.

Note, even after completing the census, you may still receive a visit or call to confirm address information or ask follow-up questions about your responses.

To respond online (the questionnaire must be completed in one session) visit My2020census.gov.

Conservation Corner: Last week’s Colorado Parks and Wildlife Commission (Commission) virtual meeting included six hours of presentation, discussion, and comments on the process of wolf introduction. Many eyes and ears were fully focused on them. […]