By Brittny Campos
Special to the Herald Times

RANGELY | Rangely welcomed the Seaplane Pilots Association on July 14 for the second Colorado Mountain Splash-In. Starting at 8 a.m., the pilots took their aircraft to the Rangely Airport to have an aquatic nuisance species inspection and decontamination of the airplanes. This is a very important part of this event. The aircraft, both full size and RC, need to be inspected and decontaminated so they do not transfer invasive species between bodies of water. After they passed the inspection, they began the spectator part of their event.
Carl Mattson, pilot of the Lake Amphibian and 1972 CNCC graduate, put on quite a show. He performed several maneuvers demonstrating landing, floating and take off. Many spectators, kids and adults alike, “oohed” and “ahhed” as he passed by. 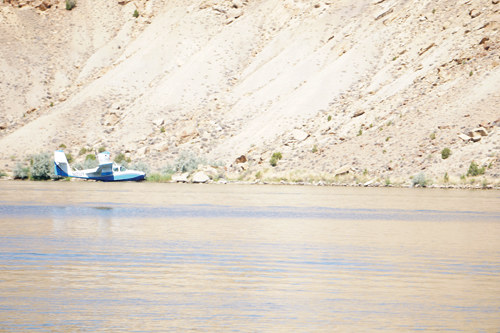 After landing, Mattson allowed people to take a gander at his plane and offered rides to kids ages 14-17.
The Lake Amphibian is what is known as a “flying boat” because the hull of the aircraft is the boat itself. Planes with pontoons are float aircraft. Collectively they are seaplanes. Ray Hawkins, Colorado field director of the Seaplane Pilots Association, mentioned Kenney Reservoir is “the only place in the mountain west we know of that a seaplane can land and enjoy the vistas that are in Colorado.”
Three planes and their pilots participated. One of the planes was homebuilt, but was unable to land on the water because the pilot did not have a required certificate, but he did do a couple fly-bys. Carl Mattson, flying a 1975 Lake 200, provided rides to six attendees. Other seaplane pilots in flight were Wayne Rudd, flying a 1959 Supercub and Mark Thaemert, flying a 2008 Murphy Moose. All three of the pilots are located in Colorado.
Hawkins said the weather was ideal for the pilots. Having some wind and slight waves makes landing on the surface of the water easier for the pilots. The waves help them to judge the distance as they are coming in for a landing. It also helps them with take off by breaking any suction to the water the plane may experience. Hawkins was forthcoming when discussing why they chose Kenney. Around 2009, the Seaplane Pilots Association was looking for places to land seaplanes in Colorado, but none were to be found. Colorado was the only state that did not allow any planes to land on public waters. Since then, actions have been taken towards seaplanes eventually being able to land in two state parks. Alden Vanden Brink, district manager for the Rio Blanco Water Conservancy District, was at Kenney enjoying the show as well as many others. After the first part of the show, a free barbecue lunch was offered to the public. The spectators took advantage of the weather by taking their boats on the water, floating on tubes and swimming.

Listen to this post RANGELY | Come see the seaplanes, big and small, land on Kenney Reservoir Saturday, July 14 between 8 a.m. and 4 p.m. This splash-in barbecue picnic is open to all. A […]

Listen to this post RANGELY | The illegal, unapproved relocation of fish from one body of water to another continues to cause significant problems for management agencies, water providers and ethical anglers across Colorado. Recently […]

Listen to this post Unlike Rangely’s Kenney Reservoir, Rio Blanco Lake, which is 18 miles west of Meeker, may or may not have ice in the middle that would allow ice fishing. It would be […]