MEEKER | Most everyone who suffers from some sort of mental disorder, does so in private. That’s why it’s so hard for people to take these illnesses seriously. That, and the lack of research and education that has been done to make people more aware. It’s especially hard for people to understand what someone might be going through. With physical pain, people are able to easily describe what it feels like, but with mental health, it’s a guessing game. You can try to make people understand what’s going on inside of your head, but people can’t see what’s going on inside and that’s what makes it so difficult. Because of this, a lot of people who suffer from mental health disorders don’t tell anyone and their illnesses go untreated.

One in five young adults are said to have suffered a serious mental health disorder at some point in their life. With all of the added stress that goes on in a teenager’s life, it’s not surprising this statistic exists. It’s no doubt that social media, while having some positive influence, is the root of some teens’ issues. When you add the stress school puts on kids, it’s surprising the percentage isn’t higher.

It’s known that teens have a wide range of emotions, as they are going through a pivotal stage in their life. But when do those emotions stray from normal? It’s hard to pinpoint exactly if a teen is suffering from something they would rather keep hidden. Symptoms can vary from person to person or even from day to day and that’s often why mental health disorders aren’t identified as much as they should be. Recent reports have come out that say the teen suicide rate has reached its highest level in almost 20 years. You would think that with these newfound facts people wouldn’t brush off mental illnesses as much as they do. People tend to forget that even though you can’t always see mental illnesses, they can be just as life-threatening as physical illnesses. 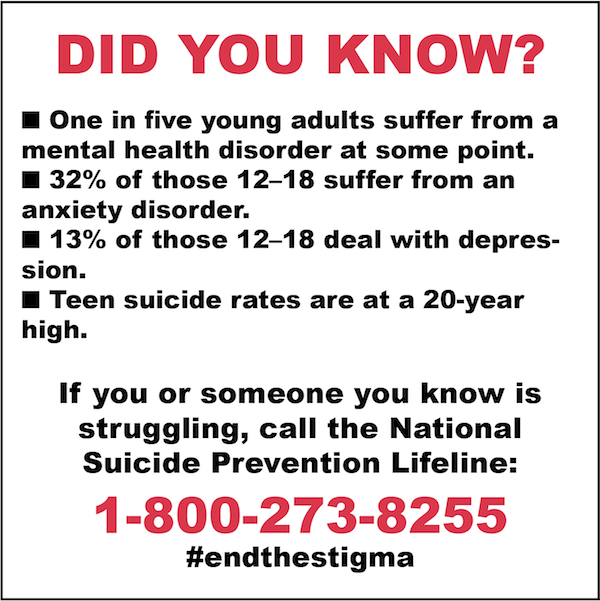 Teens often get written off as being dramatic or told they haven’t experienced anything that validates what they’re feeling. Today approximately 32% of 13 to 18 year olds have been diagnosed with an anxiety disorder and 13% of 12 to 18 year olds suffer from some sort of depression. Getting help can be a confusing task for most, because some don’t want to admit that there is something wrong. Society as a whole hasn’t validated or accepted mental illnesses yet. When they do, getting the right help, will benefit so many teens and adults. If you are struggling or if someone you know is, there are hotlines available. The National Suicide Prevention Lifeline’s number is 1-800-273-8255.

By SOPHIA GOEDERT | Special to the Herald Times

RANGELY I A year after the body of Laurie French, 38, was found off County Rd. 23 just outside of Rangely, her family and friends have questions about how her disappearance was handled by law […]