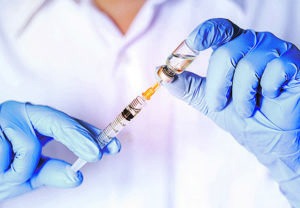 MEEKER | According to the Oxford Dictionary, community or “herd” immunity is defined as “the resistance to the spread of a contagious disease within a population that results if a sufficiently high proportion of individuals are immune to the disease, especially through vaccination. The level of vaccination needed to achieve herd immunity varies by disease but ranges from 83 to 94 percent.”

How does community immunity work?

Germs can travel quickly through a community and make a lot of people sick. If enough people get sick, it can lead to an outbreak. But when enough people are vaccinated against a certain disease, the germs can’t travel as easily from person to person—and the entire community is less likely to get the disease. That means even people who can’t get vaccinated will have some protection from getting sick. And if a person does get sick, there’s less chance of an outbreak because it’s harder for the disease to spread. Eventually, the disease becomes rare—and sometimes, it’s wiped out altogether. (From the website vaccinations.gov)

Who does community immunity protect?

Community immunity protects everyone. But it’s especially important because some people can’t get vaccinated for certain diseases—such as people with some serious allergies and those with weakened or failing immune systems (like people who have cancer, HIV/AIDS, Type 1 diabetes, or other health conditions). Community immunity is also important for the very small group of people who don’t have a strong immune response from vaccines.”

According the Center for Disease Control (CDC), as of April of this year, “Thirteen outbreaks (of measles) have been reported in 2019, accounting for 663 cases, 94% of all reported cases. Six of the 13 outbreaks were associated with under-immunized close-knit communities and accounted for 88% of all cases. From Jan. 1 to Aug. 8, 2019, the number of individual cases of measles has risen to 1,182 in 30 states. This is the greatest number of cases reported in the U.S. since 1992 and since measles was declared eliminated in 2000.”

What does all this mean to Rio Blanco County?

In a small, tightly knit community like Meeker, an outbreak of a disease such as measles or even influenza could be devastating. What many people don’t realize is that many of our childhood vaccinations do not provide permanent immunity. For example, the vaccination for the disease known as pertussis (whooping cough) only lasts approximately 10 years. This means that if an un-immunized child contracts pertussis, it is very possible that their parents (and even older siblings) could contract the disease as well. Not only does this put the individuals at risk, it puts the entire community at risk. An outbreak of sick parents could negatively impact almost every element of life in our town. Despite the fact that the contraction of any of the diseases used in this example could be prevented by vaccinations, statistics indicate Rio Blanco County is still at risk.

What are community leaders doing to prevent a local outbreak?

Rio Blanco County Public Health Director Alice Harvey explained that measles was declared “eradicated” as of 2000, however, cases of the disease have nearly quadrupled since that time.

“We have an increasing number of young adults who are under the impression that vaccinations for formerly eradicated diseases like measles are no longer necessary and this just isn’t the case,” Harvey said. “They grew up in a world where these diseases were not a threat, therefore they may not see the importance of vaccinating their children. Although there are some who still see the vaccines as dangerous, for others it just not on the forefront of their mind to vaccinate their children perhaps because they don’t realize the importance of being vaccinated.”

There was a call to action by Governor Polis earlier this year to increase the percentage of full measles, mumps and rubella (MMR) vaccinations. According to a report presented by Colorado Public Radio, “The CDC figures show that while most Coloradans do vaccinate their children, less that 89% of kindergarten-aged children have been vaccinated for measles, mumps and rubella. The national average for MMR is about 94% and Colorado has the lowest kindergarten vaccination rate in the nation.”

A bill introduced during the last Colorado legislative session (HB 19-1312) was aimed at improving the state’s vaccination rates by standardizing the process to “opt out” of the immunizations children are required to have in order to attend public school. The proposed changes would require parents to complete a standard form and submit it in person to a local or state health department. This would give health professionals the opportunity to provide information to parents so that their decision whether or not to have their child immunized would be an informed decision. The bill passed the Colorado House but was delayed in the Senate and the legislative session ended before the bill could be presented for a vote. Governor Polis was quoted as saying that he would not sign HB 19-1213 in its current form.

According to Harvey, there should be no economic reason for anyone to forego being vaccinated. There are programs in place that accommodate the uninsured or even under-insured. The cost of vaccinations can be drastically reduced or even eliminated if necessary.

“It’s never too late to get vaccinated,” she added. “If a child or an adult has been without vaccinations or may have been under-vaccinated [some vaccinations require a series of vaccine applications that may not have been completed], they can get caught up.”

Selle said parents opt out of vaccinations for their children for various reasons. “By law, we must have either immunization records or their opt out form and if we don’t have one of those two, by law, we are required to suspend the child from school until we get one or the other,” he said.  The district is required to report immunization data to the state by December. Parents are usually notified sometime during the first semester of the school year of their student’s impending suspension.

Asked if any educational materials are provided to parents who are considering opting out, Selle said, “When a parent opts out, we try to provide them with informational materials but ultimately, it’s the parents’ choice. There are efforts to educate the parents.”

The district is also developing a plan in the event of an outbreak.

The Rio Blanco County Department of Health is planning a communicable disease community tabletop with an accompanying presentation on communicable disease prevention and outbreak response on Sept. 17 at 6 p.m. in the admin conference room at the courthouse. The meeting will be open to the public.

RBC | Fourteen days of vacation at the beach whizzes by at warp speed, but enduring 14 days of stay-at-home quarantine due to COVID is almost as much fun as watching paint dry. Quarantines are […]

Guest Column: Is there such a thing as a good GMO?

By Julie Drake Special to the Herald Times RBC | Are GMO’s (genetically modified organisms) as evil as they are made out to be? Many people fear tinkering with genetics is a slippery slope toward […]

RBC | Due to a national delay in influenza vaccine shipments, Rio Blanco County Public Health will not be able to provide any further flu vaccines for adults until November. Receiving a flu vaccine in […]