MEEKER I The holiday vacation provides great opportunity to spend time with kids sledding, skiing and taking advantage of the great area where we live. Dan and Eve Seeley remember vividly trips to the ski area with a station wagon full of kids. They are another example of family’s finding time to have fun amid the hard work of running an extremely large ranch. 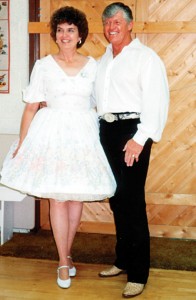 Dan first came to Meeker in 1940 when he was 1-1/2 years old. His parents, Helen and Carl, were looking for a place to run sheep. Prior to moving to Meeker they transported their sheep by train to Paonia and Leadville to spend the summers. When summer was over they shipped their lambs and trailed the adult sheep back to Utah. Carl was persuaded to purchase land in the area by James Wash Sheridan, who had only positive things to say about this country.
Carl and Helen bought land in Scenery Gulch between Meeker and Rangely and lived there until their daughters, Beverly and Patsy, were old enough to go to school. They moved the family to town to the large brick home currently occupied by Charlotte Mobley. Carl ran sheep and his two sons, Dan and Gerry, continued the business, running as many as 5,000 sheep, 700 heifers and 1,000 yearlings. With all the work that came with running an operation this size, Dan and Eve still managed to do things with and for their children.
If snow skiing was on the agenda, they simply started their day a few hours earlier, sometimes as early as 4 a.m. to get the animals fed and the cows milked in order to arrive at the mountain when the lifts started. Along with skiing, their kids Marty, David, Karen and Justin were involved in many other activities. They were state champion wrestlers, successful in 4-H, stellar students and inherited an incredible work ethic.
Dan and Eve seldom missed a wrestling match or activity their children participated in and they laugh when talking about “being done” with sitting on the hard bleachers in the gym when their last son graduated from high school. Little did they know they would be doing it all again as their grandchildren are now on the same track as their kids were. One of grandsons recently won the Warrior Classic wrestling tournament as a sophomore and was named the outstanding wrestler in the large school division. He is one of 12 Seeley grandchildren: 11 boys and one girl. Their first great-grandson is due in March.
Eve moved to Meeker from Scott’s Bluff, Neb., in the sixth grade. Her parents, Jess and Honor Pilkington, ran a bakery in Meeker for approximately 14 years. The bakery was located next to where Shepherd’s Office Supply is now. She remembers her father getting up every morning at 2 a.m. to begin working. She helped fry donuts and wrap bread during her time off from school. A baker’s dozen sweet rolls cost 50 cents then and was well worth it. Locals still remember how great the baked goods were.
Dan and Eve were married in 1958. Through the years they became very involved in square dancing. They began dancing in high school and have since traveled to New Mexico, Arizona, Montana, Kansas, Nebraska and all over the state of Colorado. There were clubs in Craig, Battlement Mesa, and Grand Junction, and one in Meeker with a with a waiting list to get in. Dan and Eve not only danced, they gave lessons and Dan “called” the dances. His voice and unique ability has made him well-known among the square dancing community. At one time he was booked for dances for five years and the two made more than 50 trips to Denver in one year, beginning with calling for dance clubs on Wednesday or Thursday and staying on some occasions until Sunday. They also attended a classics weekend in Estes Park, Colo., for nine years, where 60 couples got together and spent the weekend dancing. Anyone who is involved in square dance around our state and neighboring states recognize Dan’s voiceand the couple’s time spent giving lessons and simply keeping the tradition alive.
When asked what has changed the most over the years, they both smiled as they thought of the times they used to be working, dancing and following kids back when lift tickets were $4 at Sunlight. “It was a lot of fun in those days,” Dan said.
Their accomplishments are to be commended. They have raised successful children and grandchildren, been involved in the local 4-H clubs and dance clubs, and perhaps their most admirable quality is that they still made time to have fun with their kids.
Facebook Notice for EU! You need to login to view and post FB Comments!

MEEKER I One definition of loyalty is “a feeling or attitude of devoted attachment and affection.” Another is “faithful adherence to another.” Loyalty may be the simplest way to describe the relationship established on the […]

Dinosaur ‘with skin on’ a rare paleontology find

By Pat & Niki Turner editor@theheraldtimes.com RANGELY | They call him Walter, and they’re working as fast as they can to get him, or her, out of the side of a rocky sandstone cliff in […]