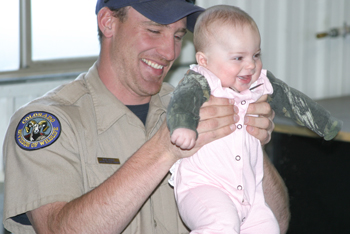 MEEKER I Colorado Division of Wildlife District Wildlife Manager Mike Swaro has been named a 2009 recipient of the Torch Award by the North American Wildlife Enforcement Officers Association (NAWEOA).
Swaro, whose first assignment was in Meeker, was presented the award July 22 at the NAWEOA annual conference in New Brunswick, Canada.
“Mike’s a dedicated wildlife officer,” said Area Wildlife Manager Bill de Vergie of Meeker, who supervises Swaro. “This is a big honor and we’re thrilled that Mike was selected to receive this award.”
The NAWEOA Torch Award is presented annually to one officer from each of the NAWEOA regions. Colorado Division of Wildlife is one of 13 agencies in the Western US Region.
The officer must be in their first five years in wildlife enforcement.
Swaro fulfilled his dream of becoming a wildlife officer when was commissioned by the Division of Wildlife in 2006 and assigned to the Meeker West district in the Piceance Basin.
While serving in the Piceance Basin, Swaro became quickly familiar with the expansive energy development that is occurring in that area. He worked closely with energy companies to educate their employees about the wildlife they might encounter while working in western Colorado’s natural gas fields.
In his first year on the job, Swaro made a large case against a group of men from New York who had poached four deer.
The case was solid as Swaro used his training to conduct a thorough crime scene investigation, operate surveillance of the suspects, seize evidence and interview the individuals involved. In the end, all four of the men pled guilty to three or more charges.
This case in his rookie year was a sign of things to come in regard to Swaro’s law enforcement work.
In 2007, Swaro began assisting agency investigators with a covert operation to locate an illegal baiting operation that was widely spread across public land in the Meeker area.
The investigation uncovered not only the illegal baiting but an illegal outfitter who was purchasing private land licenses for his clients and then placing them on public land to hunt.
The covert case resulted in felony charges against the man behind the operation as well as criminal charges against four hunters and two hunting guides who knew that the practices were illegal.
The case was successful because of the commitment of Swaro and fellow wildlife officer Jon Wangnild, who both dedicated long hours to scout the land and monitor the activities of the suspects in the case.
In 2008, Swaro transferred north to the Craig South district, which covers some of the state’s finest elk habitat. In his new district, Swaro is often patrolling the vast and remote expanse of the Flattops Wilderness Area on horseback.
Swaro has also quickly become involved in the community of Craig. Shortly after moving into town, he began to hear about some shady hunting activity involving three men from Virginia.
Through close contacts in the community and through solid surveillance techniques, Swaro was able to make a case against the three men. It was determined that the men had been involved in the illegal killing of 20 deer and three pronghorn.
The case resulted in 22 felony charges. Two of the men involved have pled guilty and the case against the other is pending.
Swaro’s involvement in the community of Craig isn’t just law enforcement related. He recently started a mentoring program at the local high school where he is working with a group of students to educate them about wildlife and wildlife issues. His program also seeks to encourage students to consider wildlife management educational opportunities beyond high school and to consider a career in wildlife management.
Students involved in the program have worked side-by-side with Swaro and his fellow officers in operations to trap and mark elk for a movement study and to teach young children the excitement of fishing at recent fishing expos. Beyond the direct work at Moffat County High School, Swaro spends time presenting educational programs to all ages of school kids.
Swaro grew up in Salida and is an avid sportsman.

Listen to this post I would like to say how much I enjoyed the games at the district basketball tournament. However, I was very disappointed in the sportsmanship of the Meeker boys’ team and coach […]

Loose Ends: These days thrifty is no longer nifty

Listen to this post “Doing without” and “making do” are two traditional cost saving measures that one hears little about these days. The two time-honored traditions began in the earliest days of the area’s settlement […]