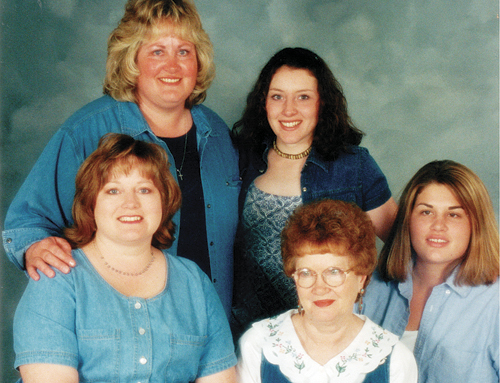 MEEKER I “I never got over the drawl,” Dorothy Chappell said in her soft southern accent. The gentle drawl, held over from her early years in Texas, seems well-suited to her kindness and devotion to family.
Dorothy was born in Hereford, Texas, and lived there until she was 14. Her family moved to Eads, Colo., where her family ran a tourist court, managing cabins and a campground for travel trailers.
She was graduated from high school in Eads and met her “Texas cowboy,” Dee Chappell, there. Dee was in the United States Marines and served in World War II. The couple wed in 1952, and lived in Eads for about three years, starting their family with the birth of their son, Clint.
Dee’s job as a cowboy took the family to Texas, where they lived for three years. When they returned to Colorado, Dee worked for the Medina Ranch in Alamosa. Their daughter, Sherri (Overton), was born there. When the Twinchera Ranch needed a good cowboy, Dee fit the bill, and went to work for one of the largest cattle ranches in the western states, running more than 1,000 head of cattle. All the work was done on horseback, even if they had to haul their horses many miles before they started. While at the Trinchera, their third child, Sondra, was born.
After a few years, the family moved to Steamboat to work at another ranch and made a connection with owner of the Keystone ranch on Strawberry Creek.
Their home did not have TV or any of the “modern gadgets” but it had space. Dorothy had to drive the children 15 miles just to catch the school bus at Wilson Creek, which was still a long way from school.
“It snowed a lot then and if we were late, the kids missed the bus,” Dorothy said.
Everyone on the ranch had to get up at 5 a.m. to make the commute to town. Fortunately, the Dearmans moved to the Christmas Tree ranch not long after and the two families shared the duty of driving kids to the school bus. Tom Hinsdale was the owner of the Christmas Tree ranch for the first years on the ranch and although the operation was an incredible task, the family remained there for eight years until the Keystone was sold to four different owners and management divided.
As the years passed, Sherri got her driver’s license and drove her siblings to school. This took a great deal of strain off Dorothy and enabled the kids to be more involved with school activities. The family had what they needed on the ranch — chickens and plenty of meat to be butchered — but they made one trip a month to Craig to buy groceries and supplies.
Both daughters were graduated from Meeker High School, Sherri in 1975 and Sondra in 1977. After the Keystone Ranch, the Chappells moved to the Superior Ranch, which was later Multi Mineral Soda Plant. They lived just across the White River off County Road 5. An energy company now sits there.
Dee farmed and the women in the area would break the nahcolite out of the shale that was hauled in.
“The nahcolite is yellow and the shale is bluish-gray,” Dorothy said. They would fill barrels with nahcolite to be hauled out. When the plant reopened years later, they had discovered a new way to separate the nahcolite from the shale.
Sherri married Dave Overton in 1977. They will be married 35 years this year. Sondra married Dirck Garcia in 1978. The two will celebrate their 34th anniversary this year.
Dee and Dorothy moved back to Texas in 1987. Dorothy remembers coming up to visit for a week at a time and while she and her daughter walked together, the kids Sherri taught would run out and yell, “Hi, Miss Sherri!” Sherri taught preschool in Meeker for 19 years. Dorothy is very proud of her family and their accomplishments.
Dee passed away in 1998 in Texas, and the family moved Dorothy back to Meeker to be with them.
When asked what she likes most about Meeker, Dorothy said, “I like it here because of family, it is beautiful country and almost a perfect place.” She certainly enjoys the convenience of living in town now and having the opportunity to be around family.
Dorothy has lived an exciting life, standing by her “Texas cowboy,” and instilling loyalty and family values in her children, grandchildren and great-grandchild. All of her children live in Meeker now. Clint works for the county along with his brother-in-law Dave. The family is extremely close and Dorothy has enjoyed watching her four grandchildren and one great grandchild grow up. Her home is filled with pictures of family and her voice is filled with love and kindness for them.

Listen to this post Mother’s Day is Sunday, but not all moms feel honored or appreciated. Some may feel overwhelmed, or abandoned. New Eden Pregnancy Care Services was started to help such moms or moms-to-be. […]

Listen to this post RANGELY | The 4-H Makin’ Bacon Pig Club has been off to a good start this year. We started off the year with a visit to a pig farm in Craig. […]

Listen to this post Meeker VFW Post 5843 conducted the service Monday at the veterans memorial at Highland Cemetery.