RANGELY | Temple Grandin, prominent author and speaker on both autism and animal behavior, visited The TANK Center for Sonic Arts in July to experience the TANK’s internal reverberation for herself and to advise TANK staff.
The TANK invited Professor Grandin for the visit because board member Lois LaFond had received an anecdotal report that a child with autism responded positively to The TANK’s resonance.
“We wanted to have the advice of someone who has known autism from the inside,” said James Paul, The TANK’s executive director. “Beyond that, Professor Grandin’s unique perspective offers us a way of perceiving the sonic experience of the TANK that enhances it for everyone, not just for folks on the autism spectrum.”
At The TANK, Professor Grandin heard a local chorus, led by Elaine Urie, sing “Amazing Grace.” She also rang the Titanium Bell, a nosecone from the Apollo program and a gift to The TANK. The Titanium Bell rings for three minutes when struck. In the 40-second reverberation of The TANK, the bell sets up a sustained chorus of harmonic patterns. After striking the bell, Professor Grandin put her hand on it and felt its vibrations for a long time, taking in the experience.
Professor Grandin is one of the first individuals on the autism spectrum to publicly share insights from her personal experience, writing that people on the autism spectrum have valuable, useful insights to offer. After her time in The TANK, she said that letting autistic children be in charge of their own TANK experience is critical.
“If they’re musically inclined, they may love it,” she said. “Some will love feeling the bell… For some kids with autism, they tolerate it better if they have control. The results will be very, very variable.”
Dr. Grandin is a professor of Animal Science at Colorado State University. Her insights about livestock handling have resulted in widespread equipment changes in the industry. Today half the cattle in the U.S. are handled in facilities she has designed. She has been interviewed on many national TV shows, including 60 Minutes, and articles about her have appeared in Time Magazine, the New York Times and elsewhere. HBO made an Emmy-winning movie about her life.
The TANK Center for Sonic Arts is a nonprofit facility with a fully-equipped, state-of-the-art recording studio, concert programming and community events. The TANK offers free public hours on Saturdays from 9 a.m. to 1 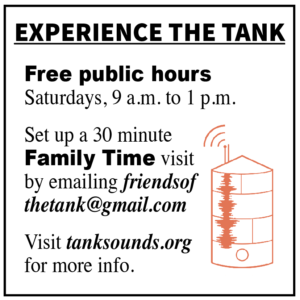 p.m. and Family Time visits during the week. To learn more or sign up for Family Time Visits, send an email to friendsofthetank@gmail.com.
The TANK’s staff and board will continue to plan a program for autistic children. “We hope to accommodate everyone as we come to understand The TANK’s full potential,” said Paul.
At the close of her visit, Dr. Grandin’s hosts at The TANK asked if she would like to sing something with them. She didn’t know too many songs, she said, just a few patriotic ones. Her hosts suggested “America the Beautiful,” and Dr. Grandin sang it along with them in the rich resonance of the TANK, her face by the end wet with tears.

By Julie Noyes julie@theheraldtimes.com RANGELY | At the 27th annual Dana Crawford and State Honor Awards Celebration held May 18 at the Denver Center for the Performing Arts, the TANK Center for Sonic Arts will […]

Ag and Business Day offers something for everyone

MEEKER I Aug. 26 will be an educational and entertaining day for those who have any tie to agriculture — or not. Agriculture, general business education, the “State of the County” address and renowned livestock […]

Family Time at The TANK Saturdays

RANGELY | The TANK Center for Sonic Arts is instituting Family Time at the TANK on Saturdays from 3-5 p.m. During these hours we will offer one family at a time their own half hour […]