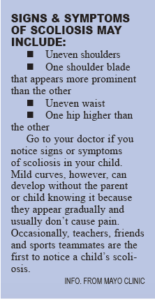 MEEKER | Kasey Rosendahl, 19, is a weekly participant in the Meeker Summer Rodeo Series. Rosendahl has loved rodeos since he was a little kid. Rodeos have always been a dream of his. When he was little he did the mutton bustin’ at some of Meeker’s rodeos, but he only started bronc riding a year ago during the first annual Meeker Summer Rodeo Series. Rosendahl is a very passionate and determined rider, even though he suffers from scoliosis, a sideways curvature of the spine that occurs most often during the growth spurt just before puberty. His family fi

rst found out when Kasey was 14. His family recognized the signs early because his mom, Tiffany Rosendahl, and sister Abby also suffer from it. During his last check-up in April the doctors said that his thoracic spine was at a 55-degree curve and his lumbar was at a 51-degree curve. When asking him how it affects his rodeoing he replied “It affects my balance, and I’m prone to more injuries. I mainly just try to pretend it’s not there,” he said. With his back getting increasingly worse he plans on having surgery in September to correct it. He doesn’t know if he’ll be able to rodeo after the surgery, but he really hopes that he can. His family is definitely his biggest supporter. They were reluctant to let him rodeo at first, but then they decided this may be his only chance, so why not live it? They go and watch him at all his rodeos and cheer him on from the sidelines. “He tries his best every week even if he’s in pain. He doesn’t like people knowing because he doesn’t want people treating him any differently,” said his mom Tiffany Rosendahl. “I want to thank my family for all their support and coming to all my rodeos. I went to the first annual Hunter Norman Memorial ranch bronc riding Saturday, June 23 and got the opportunity to compete against 30 bronc riders. I tied for first place in the qualifying round out of 30 with a score of 81. And I went into the short go round with the other top nine riders. I ended up with 10th overall and I am heading to Paonia Bulls ‘N’ Bronc War on Saturday, June 30,” Rosendahl said. He is also one of three Meeker residents sponsored by Rio Blanco County Public Health as a tobacco-free cowboy. “We are proud to have Kasey helping us prevent youth from starting tobacco use and bring cessation information to those that do use tobacco!” stated a press release from the department.