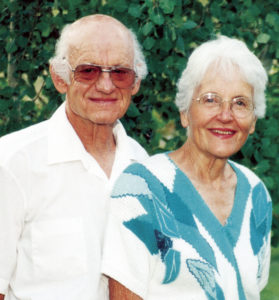 MEEKER I Those who are brought up in the homes of hardworking people often become hard workers themselves. Hardworking describes Bill and Phyllis Schoenhal perfectly. Bill, who is more than 80 years old, continues to work like a much younger man.
Recently, Bill had to cut down a tree in their yard they feared would fall onto their home. He built an incredible contraption to guide the pieces of the tree safely to the ground as he removed them.
Phyllis told Bill, “Don’t climb up the tree when I’m not here, I don’t want to come home and find you with a broken back.”
“Heights don’t bother him,” she added. “He was a derrick hand in the oil field.” He farmed, roughnecked and worked for a county in Texas before he retired and they moved back home to Meeker.
Phyllis was born and raised in Meeker and shared her memories and area history in the two volumes of “This Is What I Remember” to tell her family’s story.
Her grandfather, Jack Service, was a blacksmith for the railroad in Wyoming, Oklahoma and Pueblo Colo. He was working on the well-known “Roller Dam” in DeBeque Canyon when he decided it was time to move to Lime Kiln Hill, where his good friend Lon Moyer lived.
On May 8, 1914, he and his family loaded horse-drawn wagons and moved to Lime Kiln Hill where they homesteaded near Moyer and Martin Slifka. Jack cut the logs to build the house and barn now owned by Mike Grady and later built a blacksmith shop that remains today.
Jack and Mable (Walker) Service had five children: Madge, Gae, Jim, Audiene (Toots) and Eve. Jack wanted his children to have an education and after talking to the neighbors, he donated the land to build a schoolhouse. Together, the settlers put up a log school building. Sometimes in the winter, classes were held at the Service home.
Mable passed away two years after the family had moved to Lime Kiln and Jack raised the children on his own. He built a reservoir and dug three different wells before finding a good one. He also farmed and trapped to make ends meet. The homesteaders – Cose, Slifka, Peaslee, and Service – went in together on a horse-powered threshing machine that was kept where their fences met. The machine remained there for several years even after the families left.
Phyllis’s father, Jim Service, helped his dad work on the Lime Kiln homestead until he was able to “prove up” his own homestead on Flag Creek. About this time a new teacher, Eleanor Margaret Kuglar, moved in to teach summer school at Lime Kiln. Jim would ride by the school to see Eleanor. He finally began talking to her and the two fell in love. They were married Oct. 26, 1929. The couple lived in Palisade for a while but the Depression was hard on them. They had a quality tomato crop but people did not have money to buy the tomatoes. They moved back to Flag Creek and Eleanor taught in the county schools for 45 years, employed by the Meeker School System until her death. Jim was a carpenter and became a well-known craftsman. The two had three children of their own, Phyllis Elizabeth, Jack Duane Conrad and James Joseph (Jimmy Joe), and were foster parents to two of Eleanor’s Axial schoolchildren, Sam and Sharon Love.
Jim and Eleanor were members of Grace Bible Church. They donated the lots for the building and Jim directed the construction of the church. Eleanor taught the youth Sunday school class for more than 30 years.
Bill and Phyllis have been married nearly 50 years and have three children: Terry, Jalina and Liria; four grandchildren and four great-grandchildren. Phyllis used to bring her grandchildren with her to their Flag Creek cabin in the summers when they were living in Texas.
“Those were some of the best times, camping out, fishing, being outdoors in this beautiful place.” Phyllis taught school in Texas, owned a fabric shop, worked in a flower shop and even a Quik Stop. When she moved back to Meeker she went to work for the Meeker School District. Today, she has a mail run.
“I grew up on a horse, riding all over the place.” She still loves horses and tries to find time to ride. She even has a pack rig for her horses to spray weeds. “My old mare might try to buck me off it has been so long since I’ve ridden her, she has always needed a lot of warming up.”
Phyllis learned to work at a young age. Today, nearly 81, she goes to work nearly every day and then does her chores. In fact, she was unable to sit down for an interview until nearly 8 p.m. Her endearing smile reveals her happiness in the area and with her husband.
Of Meeker she says, “It is home. It is one of the most beautiful small towns in the country.”
The Schoenhals are proof that staying active, enjoying the opportunity to work, and the strength of family bonds keep people young.

Watch for elk on Highway 13

We at the Xcel Energy Meeker office would like to thank all who participated in our Annual Hawaiian Luau Golf Tournament July 23. The tournament was a success with great weather and great fun. We […]

The Meeker Herald — 125 years ago • Hudson, Jewett and Wolfe is the name of the livery and feed firm about to start in Meeker shortly. The boys were placing lumber in position this […]