RANGELY | The definition of an unsung hero is one who does great deeds but receives little or no recognition for them.

They are an ordinary person who makes themselves extraordinary and that is exactly what Rangely School District’s Beckey Hume has done during her 33 years of service. From expected daily tasks like answering phones, directing wayward and sick students, and keeping more than nine principals lined out she has done it all and then some. 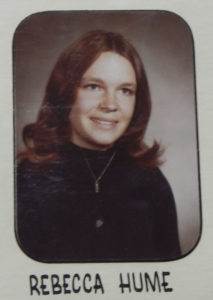 Hume, the administrative assistant to the principal at the Rangely Junior/Senior High School, was born in Rangely to parents Jerry and Loyann Hayes. Hume has been married to her husband, John Hume, for 48 years.  Together they owned a horse and cattle ranch for many years 18 miles east of Rangely on Highway 64. From 1997-2015, she and John owned and operated Heritage Building and Home Center. She smiles when she reminisces about initially applying for the school district.

“When I was hired for the school district, I didn’t think that I had a shot because I had gone to college in Denver to be a legal secretary and as you can imagine there were not many opportunities in Rangely for a legal secretary.” She said 40-50 women interviewed for the job that she was eventually hired for and that a timed typing test was one of the big factors in selecting the final candidates.

In less than a month and a half, Hume will be retiring from her lifelong career. Nine of her 33 years she spent at Parkview Elementary School before moving to Rangely High School, which later became the Rangely Jr./Sr. High School. The current building is where she has spent the last 24 years of her career with the school district. She said the transition from the elementary to the high school was difficult but also the most rewarding hurdle in her career.

Hume has worked with nine different principals since that transition from the elementary to the high school and says that “getting to know each one’s expectations was the challenging part.”  Mike Kruger, the Rangely High School Principal from 2000-2002 and current principal at Parkview Elementary says, “Beckey always laughed at my funny stories and if she wasn’t really laughing at them she faked it really well. She was a hard worker but an easy person to work with. I have been the principal in five different schools and having someone like Beckey in that position, year after year, gives stability to the entire school. Those are the people who train the new principals and have all the answers to our questions. We are going to miss her very much.”

Hume has enjoyed watching hundreds of children, including her own, come up through Parkview Elementary and successfully graduate from the high school. She has had the pleasure of working with teachers who taught her and her children. Clearly having deep ties in the Rangely community, Hume gets choked up when thinking of her family’s legacy in the Rangely Schools. A 1974 Rangely High School graduate herself, she said, “My parents, my siblings, my husband, my children and some grandchildren were all graduates from Rangely High School.”

It’s understandable that with so much personal history in Rangely’s public education system that she feels as if she “took ownership in the school system” as a school district employee. RE4 Superintendent Matt Scoggins, has worked with Hume for the past six years and said, “She has been a loyal humble servant to our community since day one. She is responsible for these important little things that people don’t even realize that she does and probably won’t until she is gone. Beckey has always been a friendly face, she has tremendous value in our school and she will be greatly missed.”

Hume has been making plans for her retirement but leaving will be bittersweet. She feels like it is a good time to retire and she is confident with the current staff at the Rangely Jr./Sr. High School office. Once retired, she plans on spending time with her large family but especially her seven grandchildren, who span in ages from 26 to 3 years old. She looks forward to traveling to Portland to visit her grandson Skyler Hume. She will also continue work with her church’s worship team, singing, and helping with church activities. Out of her entire 33 years, Hume says she is going to miss the kids and the staff the most because they have all become like family.  When you ask past students and coworkers from Rangely School District, the feelings are mutual.

Happy retirement, Beckey, and thanks for all you have done for the Rangely School District.