MEEKER I Last week’s early snowstorm swept through the Meeker area and swathed trees still laden with summer leaves under up to 6 inches of heavy, wet snow, breaking numerous limbs and branches and causing multiple power outages. Cleaning up the mess is going to take awhile.
For longtime resident Libby Morton, cleaning up includes saying goodbye to a 35-year-old cottonwood tree in the yard of her Park Street residence, but she’s grateful her other trees will likely survive, and that no greater damage occurred.
“The power was off and on all night. In the morning we had some light, but things like the furnace, the microwave and computers would not run. White River Electric did just a magnificent job,” she wrote via Facebook. “Our phone line went down with a 12 inch branch but Dale from Century Link had it back in service by 9 a.m. There are tree trimming crews coming into town and people are working to help their neighbors…I had a crew magically appear on Sunday morning to cut the ‘widow maker’ that was hanging by a thread over the garage roof. Had it let go, it would have gone all the way through the roof and leveled (husband) Mort’s wood shop.” 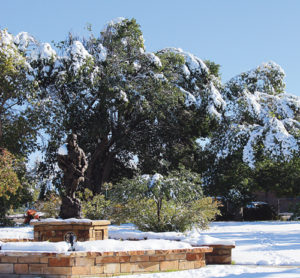 Few homes went unscathed, and Meeker Town Manager Scott Meszaros described the scene as looking like “a war zone” almost a week later.
“Some individual homes have 10 or 15 pickup truck loads (of debris) in their yards,” Meszaros said after driving around town on Monday, Oct. 7.
Most Meeker residents are accustomed to hauling their broken or trimmed limbs and branches to the street to be chipped and hauled away, free of charge, by public works employees. This time around, it’s not going to be that simple.
“I would guess there are a couple hundred semi truck loads in the town. It’s mostly the downtown core… It’s a mess,” Meszaros said.
With a single 9-inch wood chipper, four public works department employees and one truck, the debris left behind by the storm is more than the town can reasonably manage on its own.
“The problem is, everybody in town assumes that if they pile their limbs up, we’re going to come and pick it up, and that’s not the case. We are working on it, but on every block people have it (storm debris) out in the roadways. We’re trying to get the word out that if you have the means to trailer it out yourself, or hire someone to do it, please do so,” Meszaros said.
The county has come to the aid of the town by waiving the dump fee at the county landfills for limbs and branches only. Meanwhile, town employees will systematically continue working their way through town, starting at School Street, chipping and removing limbs and branches under 3 inches in diameter. However, additional precipitation will hinder their progress.
“We cant chip or shred things that are wet,” Meszaros said, because it clogs the chipper, “And we’re supposed to get wetter on Thursday. If we get snow and these branches are piled up in the street, we’ll have to plow them into yards.”
The trouble created by the storm could have been worse for the town’s infrastructure. A falling limb knocked out power to the generator that runs the town’s well, leaving the community dependent on stored water from the town’s water tanks for several hours on Thursday night.
“WREA (White River Electric Association) was very prudent restoring power. The guys worked all weekend to get it back up and we’re back to normal operating conditions again,” Meszaros said. “WREA has been helping with the limbs. There is a good effort from everyone involved, the problem is that it’s pretty immense.”
According to a press release from WREA, Frank Sampson, operations manager of White River Electric, the electric co-op “…received our first outage calls about 6 p.m. Thursday and the crews and office worked all night taking calls, clearing lines, fixing broken conductors and restoring power. At one time or another we had nearly 1,400 of our members’ meters off due to the weather.” WREA crews continued to work to restore power throughout Friday, and began the task of helping clean up downed limbs and trees over the weekend.
“We want to thank the member/consumers of White River Electric for their patience and understanding during this storm,” said Alan Michalewicz, WREA general manager, in the press release. Area residents who still have broken or fallen tree limbs or branches near or on electric lines are urged to call WREA at 970-878-5041. 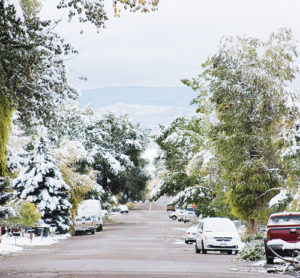 The Eastern Rio Blanco Metropolitan Recreation and Park District (ERBM), which manages the town’s park system, is also dealing with the storm’s aftermath.
“We had trees nearly in every park that suffered damage. We’ll be trying to get those straightened out this week. As for the new park at Sanderson Hills, we were very fortunate in that we suffered no damage up there,” said Rodney Gerloff, parks and facilities maintenance manager for ERBM.
“We had some pretty good-sized limbs come down on the older trees at City Park, but the trees look savable. I think we’ll be able to dress them up and they’ll come through all right,” Gerloff said, adding, “I think overall the district and the park were fortunate in that we didn’t lose any trees.”
It wasn’t the quantity of snow that caused the trouble. “I think at one point at my house I saw about four inches,” Gerloff said, but the fact that the storm arrived prior to any significant cold weather meant almost all the leaves were still on the trees. The wet snow sticking to the leaves weighed down branches that would have easily withstood a similar storm later on in the season.
Homeowners should be aware of the conditions of their insurance policies as it relates to storm damage, said Meeker State Farm insurance agent Kevin Amack via email. “Most homeowner’s insurance policies only assist with the cost to remove fallen tree limbs if the limb caused damage to an insured structure, and then in excess of (the) applicable deductible amount…It is generally best to think of a homeowner’s policy as ‘catastrophe protection,’ and not a source for assistance with smaller losses that the homeowner can financially handle on their own.” 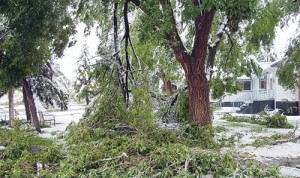 It’s not the first or the last time Meeker’s trees have battled with Mother Nature. In September 2009 a microburst shredded limbs from trunks and uprooted trees across town and Morton recalls similar storms in 1976 and in the late 1980s that “took out trees like this storm did,” including the cottonwood she planted when she first bought her house.
“It survived this storm, too, but not with the grace of its youth,” she said.

Park Mountain, standing 18 miles south of Rangely at the end of Dragon Road, remained shrouded in clouds for a week in early December as an inversion covering the valleys of eastern Utah and western […]

RBC | The White River National Forest’s winter motor vehicle use season begins Nov. 23 and ends May 20. During the winter season, all wheeled vehicles (including bikes) are limited to plowed routes or routes […]