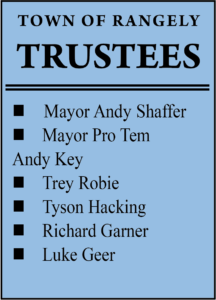 Following extensive discussion, the new board agreed to table a contribution to the development of a new drone program at CNCC in order to assist with the White River Algae Study conducted by the USGS. Town Planner Jocelyn Muller told the board that the study will potentially use a new drone program currently in the works through CNCC. Shaffer questioned why Rangely test sites had been removed from the study to which Muller responded that they are hopeful that determining the cause upriver would improve the Rangely algae problems as well. Key described the study as government waste but said he would support the drone program. Muller argued for the importance of the study and said drone footage could really help them identify causes. Garner asked how much the town currently spends dealing with problems caused by the algae. Brixius said the town spends three to four hours per day for around six weeks of the year cleaning water intake screens.

During public input Meeker resident Sandra Besseghini discussed landmarking and historical preservation and their role in heritage tourism, which she believes can help provide a “more even source of revenue” to the community. Besseghini discussed a “certified local government” which would require ordinances set by town and a preservation board. She said that there could be federal tax incentives and grant funding available. The program must be adopted on a county level but Besseghini said town support was important as well.

Councilman Andy Key updated the board on the Rangely Development Authority telling the council they are, “in an exploratory phase” with a cooperative style grocery store. He also discussed House Bill 1392 which he said is designed to help with the high expense of health care in our region. “It is very messy and complicated,” he said. The program would involve the state placing extra fees on insurance providers. Key was concerned that the bill was creating a Commissioner of Insurance who can set fees and that politicians in Denver could potentially rob the funds.

Billgren discussed the Energy and Environment Symposium he attended. He said there have been 11,000 permit jobs lost in Rio Blanco since the economic downturn and that 50 percent of local wage earners come from oil, gas and coal. He expressed concern that even though oil and gas companies will be paying higher severance taxes our county will be receiving less. “It was discouraging,” he said.

Town Manager Peter Brixius told the council that on May 1 residents of Tanglewood and Halfturn roads are invited to Town Hall to learn about the upcoming extensive road and utility work in their neighborhood. He also discussed CDOT’s developing plans to make Main St. more walkable which will include permanent crosswalks and storm drain improvements.

RANGELY I The Rangely Town Council met for a short meeting Nov. 24 with all members present to discuss a public hearing, special events permit application and renew several liquor licenses.

RANGELY | The Rangely Town Council met Tuesday in a packed regular meeting where they solicited feedback from the community on current police department practices. Town attorney Dan Wilson introduced the forum by saying the […]