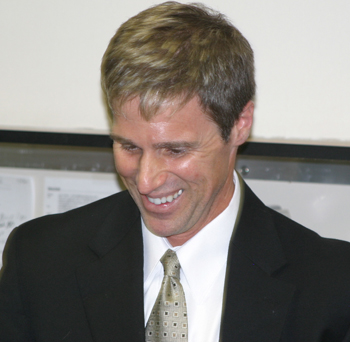 RANGELY I It won’t be long before students in the Rangely School District will be back in the classroom. New superintendent Barry Williams is already in a learning mode.
“I’ve been learning a lot,” said Williams, who came to Rangely from Virginia, where he had been principal of an elementary school. “I can’t wait to get started and get our kids in school and have a good year.”
Classes begin Aug. 31.
With the move to a new state and a new job, life has been busy for Williams. But it’s a good busy.
“It’s been extremely busy, but the adjustment is going really well,” said Williams, who replaced Dwayne Newman. “I’m privileged and proud to be the superintendent.”
As a school district, there have been plenty of adjustments, with the closing of Parkview Elementary, converting the middle school building into the new Parkview and combining middle school and high school grades into one building.
Voters approved a $15 school bond election last November.
“We’re positive and excited about the renovations,” Williams said. “We can’t wait to get started and get our kids in school and have a good year.”
Open houses will be held at the combined high school and middle school building Sept 3 and at the new Parkview Elementary (the former middle school building) Sept. 10.
“We’re going to have a big ribbon-cutting ceremony,” Williams said. “We want the public to come in and see what they paid for.”
Despite the financial challenges the school district went through last year, Williams is excited about his first superintendent’s job, and he’s excited to be in Rangely.
“It’s all about being positive,” Williams said. “I feel really good about being here. We have good people, people who work hard. The community cares. Most of all, we want to foster a positive morale and climate in the Rangely School District. We want to stay focused on learning.”
Williams’ wife, Alice, is also a school administrator. She will be commuting to a job as an assistant principal at Bookcliff Middle School in Grand Junction.
Williams, 47, credits the Rangely School Board with making some tough decisions during the past school year, such as the closing of the old Parkview Elementary building.
“That’s why they are on the school board, to make those tough decisions,” Williams said. “They’re just an excellent bunch of people who want the best for the students. They’re really concerned about the kids’ education.”
The budget problems the district went through last year didn’t dissuade Williams from taking the job.
“Nothing I thought coming in would be discouraging,” he said. “I thought it would be a challenge.”
Williams learned his work ethic from his 82-year-old father.
“He worked in the coal mines when he was in the eighth grade,” Williams said. “He didn’t finish school. He worked for the railroad for 37 years. My daddy worked real hard. A lot of my learning and knowledge comes from my dad. He showed me if you work at something, you can achieve it. That’s why I am where I am today.”
Williams followed in his father’s footsteps and worked for the railroad for 10 years before returning to college and eventually earning his doctorate degree.
He hopes to pass on that you-can-do-it attitude to students.
“Going from quitting college to getting a doctorate degree and being a superintendent of an excellent school district, I want kids to say, I can do it, too,” Williams said.
Williams plans on being a hands-on superintendent. He was the same way as a principal, where he would visit a classroom and observe or even teach.
“Just because I’m the superintendent, don’t think I won’t go in there and teach a class,” he said. “My philosophy is you go in the classroom and help the teacher and let them know you are down there in the trenches with them. My main goal is to be in the schools. You can’t run a school effectively in an office. Being superintendent doesn’t mean you’re too good to be in the classroom. You need to show you’re excited about learning. That goes back to my daddy.”

Listen to this post RBC I This week’s Meeker Chamber Member of the Week is Meeker Chiropractor Center. To read the story, go to www.meekerchamber.com.

Listen to this post RBC | Meeker and Rangely schools started the new year on Monday, Aug. 24.

Listen to this post The Meeker Herald — 110 years ago • The coal dealers are happy these days, 18 degrees below zero! • Frank E. Sheridan delivered the sheriff’s key (of Garfield) to Mr. […]