Rangely Elks Lodge #1907 hosted their annual hoop shoot on Dec. 3. Twenty young shooters competed in the hoop shoot with the top winner advancing to the district shoot in Rifle. The 8-9 year old girls’ champion was Rachel Elder. Elder could not make the trip to Rifle due to illness. Rylee Kenney was the second place finisher. She competed in the district shoot and did an amazing job. In the 10-11 year old champion was Aubrianna Tapia, Aubrianna competed in the district shoot and shot well, second place went to Carmella Fortunato, in the 12-13 year old girls group Miah Wren was the champion, second place winner was Ryann Mergleman, neither could not attend the district shoot because they both had a basketball games. Among the 8-9 year old boys the champion was Chance Allred. In the 10-11 age group Braxton Shaffer was the local champion with Matthew Morgan placing second. In the 12-13 age group Clay Allred was the champion with Marcos Quintana placing second. Clay placed third at the district shoot. I want to thank all the young men and women who competed this year and a special thanks to CNCC basketball teams for their help at our local shoot. (Front) Miah Wren, Carmella Fortunato, Rachel Elder, Matthew Morgan. (Back) Aubrianna Tapia, Ryann Mergleman, Marcos Quintana, Clay Allred, Chance Allred, Braxton Shaffer. Not pictured is Rylee Kenney.

Listen to this post NOTE: This article is from 2016; please check the online edition (link in bar above) for current information! There will be Easter egg hunts for the kids in Meeker and Rangely […]

Letter to the Editor: Rangely responds to resident’s health needs

Listen to this post Dear Editor: I want to thank the Rangely community, local businesses and everyone else for the donations for my stem cell rejuvenation. 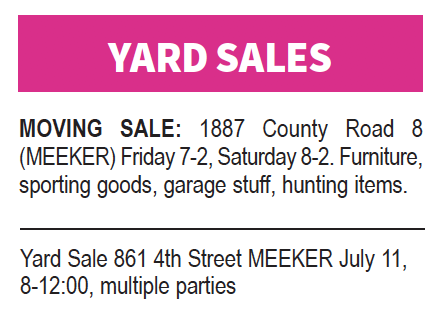