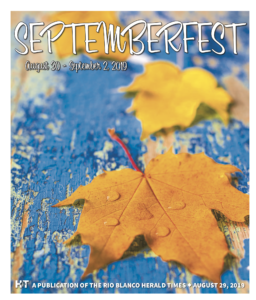 RANGELY | The origins of the annual Rangely community event Septemberfest are spotty at best but when you ask around everyone agrees Flossy Eddy and Barbara Wade organized the first Septemberfest. Back in 1976 when the celebration began it was actually held around the Fourth of July weekend.  Eddy and Wade dubbed themselves the R.A.I.D. (Rangely Area Independence Day) Committee.

Local historian Bob Haag and longtime Rangely Town Manager Don Peach recall its originating in the early 1980s.  Either way the early days of the festival were centered around a free pit barbecue with all the fixings that town folk would line up for down the street. Back then it was held near the old swimming pool which is now near the east side parking lot of Elks Park.

Festival planning committee member at that time and longtime Rangely resident Kelvin White reminisced about serving food in the hot sun. It was sweltering that first year and the Chief of Police Elliott Burke passed out cold beer to the delight of the overheated barbecue servers. There was a volunteer marching band made up of locals that entertained the audience and an architectural model of the current recreation center was on display for the crowd.

At some point between 1976 and the early 1980s the celebration transitioned to Labor Day weekend and took shape as the shindig Rangelyites know and love today.

In the 1980s, Rangely’s town square was the center of the majority of Septemberfest’s events.  Talent shows and live entertainment took place on a stage built between the town hall and the library.  Dances spilled over into Main Street.  Crowds laughed and cheered during town trivia and Septemberfest’s “challenge nights.”  You would pay $1 to challenge somebody to do silly things, like dancing the hula.

In a 2014 interview Barbara Wade recalled, “I remember once the mayor had to push his wife down Main Street in a wheelbarrow. We used to say the police would come and bring you there if you’d been challenged and didn’t show up.”

In the 1990s a Miss Rangely pageant was held for junior high and high school aged ladies, who donned sashes and crowns during the parade and events. The car show became a popular event among the locals and even started to draw entries from eastern Utah and southern Wyoming.

Year after year the festivities have grown, a craft fair, food vendors, ice cream social, bull riding, and other events and competitions have been added to the schedule of events. Festival organizers have come and gone. For the past two decades the Western Rio Blanco Metropolitan Recreation and Park District have planned and facilitated the celebration. Septemberfest has evolved throughout the years but without a doubt it remains uniquely Rangely, a place to catch up with your neighbors, bid adieu to summer, and welcome fall.

BY ROXIE FROMANG | Special to the Herald Times

Listen to this post RANGELY I Whether you’re new to Labor Day weekend Septemberfest activities or returning for a second or third decade, expect a blend of traditional favorites, revamped versions of repeat events and […]

Listen to this post RANGELY I The annual WRBM Septemberfest cribbage tournament will be held Sunday, Sept. 4 beginning at 2 p.m. at the Rangely Elks Club at 633 Main St. This year’s tournament will […]