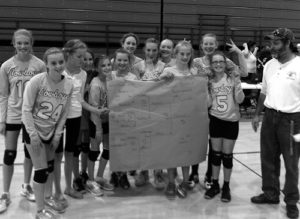 The Barone Middle School seventh grade girls’ volleyball team won its season-ending tournament during the weekend, defeating the other four teams in the competition—Steamboat Springs, Craig, Hayden and Rangely.

(Above left) The Barone Middle School eighth-grade volleyball team will play in the season-ending league tournament this Saturday in Craig.

Barone Middle School’s seventh-grade A-team won the league championship in Rangely after defeating Steamboat Springs in the first round and Rangely in the championship match. The BMS seventh-graders are coached by Greg Chintala and Shawn […]

RANGELY I The host Lady Panthers beat Meeker in three games Saturday in the eighth-graders’ A game, while the Lady Panthers’ B team won in two games.