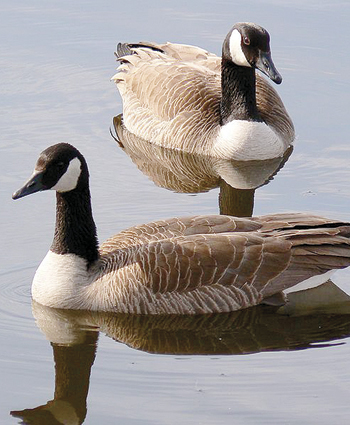 DENVER I Colorado children are not the only ones looking forward to the holiday season. Birders across the state are gearing up for two of the high points of the birding year, the Christmas Bird Count and the Midwinter Waterfowl Survey.
Thousands of people across the Western Hemisphere participate in the annual Christmas Bird Count, a grassroots effort to tally bird species from Canada to South America that traces its origins back more than 100 years. Colorado birders are no exception. From Dec. 14 through Jan. 5, volunteers will take to the field with binoculars and notebooks as they track bird populations around the state in one of the longest-running citizen science projects in United States history.
“The Christmas Bird Count is a great way for citizens interested in wildlife management to get involved,” said DOW Bird Conservation Coordinator David Klute. “It is one of the few widespread counts we’ve got that looks at wintering birds.”
Hundreds of volunteers will flock to designated “count circles” around Colorado to help document bird species and population numbers. According to the Audubon Society, more than 50,000 observers across the country participate in the bird census each winter.
“The Christmas Bird Count is the highlight of the year for many of Colorado’s birders because it’s a chance to get together with old friends and directly witness changes in bird numbers and patterns from year to year in a favorite birding area,” said Ken Strom, Director of Audubon Colorado. “It’s a rite of winter that brings with it the exciting possibility of seeing a bird species that you’ve never encountered before at this time of year.”
During the first week in January, wildlife agencies in the lower 48 states, in collaboration with the U.S. Fish and Wildlife Service, conduct the annual Midwinter Waterfowl Count. DOW biologists and volunteers will count ducks, geese and swans around the state as part of this survey.
Both of the annual bird counts gather data that state and federal biologists use to determine the prevalence and well-being of the nation’s bird populations. Such information is an invaluable tool for ornithologists, biologists and others tracking bird populations.
“We know that some birds are declining,” said DOW researcher Jim Gammonley. “If we can identify those population trends over the long run, we can be proactive and take action ahead of time.”
The first Christmas Bird Count was done on Christmas Day of 1900 as an alternative activity to an event called the “side hunt,” when people would choose sides and go afield with their guns. Whichever team brought in the most game — whether feathered or furred — won.
The tradition changed when the national association of the Audubon Society proposed to count birds on Christmas Day rather than shoot them. The Christmas Bird Count still provided excitement and allowed for friendly competition, and the tallies made every year since then continue to make a difference for science and bird conservation. The Christmas Bird Count is the longest running database in ornithology, representing 111 years of unbroken data on trends of early winter bird populations.
The Midwinter Waterfowl Count, which takes place the first week in January, began the late-1940s. It provides an annual snapshot of the continental distribution and abundance of waterfowl after the fall migration period. For some waterfowl populations, the Midwinter Count provides the primary survey data used to set population objectives, measure population size, and guide hunting regulations and other management actions.
Gammonley said ground and aerial surveys conducted near major river drainages and around Front Range ponds, lakes, and reservoirs in Colorado can lend insights into habitat use and the health and migration patterns of bird populations over several decades.
For instance, past years’ records indicate that by this time of year, most of Colorado’s 20-plus duck species have migrated south, with only eight or nine species left by early January. The mallard duck is the most common species that winters in Colorado, Gammonley said.
He said numbers of snow geese and Ross’ geese wintering in Colorado have increased dramatically over the past three decades.
Three populations of Canada geese winter in Colorado: Rocky Mountain Population Canada geese occur west of the Continental Divide, and Hi-Line Population and Shortgrass Prairie Population Canada geese occur east of the Continental Divide. Rocky Mountain and Hi-Line Canada geese also breed in Colorado and surrounding states, and their numbers have increased steadily over the past several decades. Shortgrass Prairie Canada geese breed in the Canadian Arctic and their numbers fluctuate more over time.
“That’s why surveys like this are important” said Gammonley. “We’re trying to manage our waterfowl hunting opportunities to be consistent with maintaining healthy bird populations,” he said.
As a bonus, participants take satisfaction in knowing that their observations contribute to biologists’ knowledge.
“There’s the additional reward of knowing that you’re participating in an important nationwide effort to document long-term trends in bird distributions and numbers, and that you’re contributing your personal observations to a huge body of scientific data that’s important to bird conservation in Colorado and beyond,” Strom added.
For more information about the history of the Christmas Bird Count in Colorado, go to http://wildlife.state.co.us/Viewing/Features/XmasBirdCount.htm
For a complete listing of Christmas Bird Counts planned in Colorado this year visit the Colorado Audubon Society website at, http://co.audubon.
org/, or the Colorado Field Ornithologists website, http://www.
cfo-link.org/.

While poverty has and will always be a part of the human condition, the number of people in the United States struggling to put food on their tables has increased exponentially during the latest economic […]

With Colorado’s big-game seasons just around the corner, Colorado Parks and Wildlife is reminding sportsmen anticipating the purchase of their first big-game license that there are still slots available for several upcoming hunter education classes […]

There has been quite the murmur of political opinions in the Rio Blanco Herald Times as of late. More recently of those who lean to the left.