RANGELY I In loving memory of the child who once played there, three custom benches and a one-of-a-kind concrete walkway now flank the south side of the Elks Park playground.
The “Cars”-inspired seats depict the favorite characters of Traker Frank Dembowski, the 17-month-old son of Melissa and Scott Dembowski who passed away in January. The project took shape when Traker’s grandmother Susie spotted a unique bench while driving through Fruita. It came to life through the bench’s artist, Jeff Bates of Sky River Ranch, who hand-drew the shapes onto steel and cut them into likenesses of Tow Mater, Lightning McQueen and Doc Hudson. 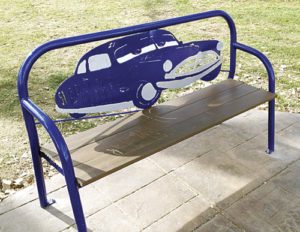 “Traker liked the ‘Cars’ movie,” Susie says. “It was the only time he’d ever sit still.”
Several Rangely participants were integral to the project, Dembowski says. The Western Rio Blanco Metropolitan Recreation and Park District (WRBM) board approved the idea, while WRBM Executive Director Tim Webber helped find the right location for the benches. Park supervisor Billy Estes and his crew prepared the site for the new seating area.
“Curt and Susie are longtime residents of the community and they’ve represented our children in the community, through 4-H support and in other ways,” WRBM board member Janet Mackay said. “Scott and Melissa have, too. We felt that it was important that we give back to them.”
Others helping with the project had bigger ideas than what Susie and Curt initially envisioned. Ralph Carabajal poured the concrete, which was donated by Joe Conrado’s Meeker Sand and Gravel. Working with wife Jona, son Gabe, and friend Toby Gaspar, Carabajal created not the “little slab” Susie had described, but something that was “way more than what I had asked…it was more artistic.”

The day the concrete was poured, several family members — Scott and Melissa, Curt and Susie, Michelle and Howdy Brown, and Kendra and Dean Allen—smoothed it out together. Next to the tire tracks that Carabajal impressed into the soft surface, Melissa added Traker’s bootprints.
Then, last Saturday, Scott’s cousin Aaron Dembowski helped Curt set the benches. The project was finally complete.
“It exceeded my expectations,” Susie said. “The bright colors, I think, fit in with the colors of the playground equipment. It just turned out awesome.”
The Dembowskis want to thank all those involved in making Traker’s space a reality. They encourage those enjoying the park to respect the benches and the little boy remembered through them.

Listen to this post RANGELY | Contest is Saturday, July 1, at Elks Park. You may begin cooking no earlier than 8 a.m. and judging will be at 3 p.m. If you need more information […]

Listen to this post A grand re-opening of Elks Park in Rangely was held Saturday last to celebrate the improvements to the park in the past year.