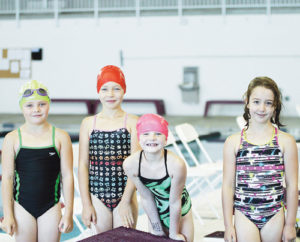 The Rangely Hurricanes took 18 swimmers to the Western Slope League meet in Grand Junction, and, according to their coach, “The kids all improved and did a great job.” Kenzie Varner, Nora Gianinetti, Riley Reeves and Laurie Ward, pictured above, placed third in the 100 free relay. The 8-and-under boys’ team finished second in the 100 medley and Corbin Lucero won a silver medal in the 50 free at the WSL meet. Patrick Scoggins now has six qualifying times for the Junior Olympics and returned with six WSL medals. Andrew Scoggins also qualified to swim in the Junior Olympic meet Friday and eight Hurricanes will swim in the Summer Club State Championships held in Canon City in two weeks.

Listen to this post The Rangely Hurricane swimmers tackled the waters Thursday, June 28, at their annual USA Swimming Swim-a-Thon.

Listen to this post RANGELY I The Hurricanes traveled to Craig over the weekend to participate in the annual ABC Open meet sponsored by the Sea Sharks.

To market we will go …