Freshman standout Kathryn Doll saved her best for the most important meet of the season. This year all classifications from 1A schools to the largest 5A schools competed together at the same venue, Jefferson County Stadium in Lakewood. 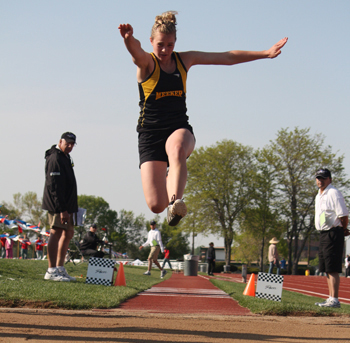 Doll was the busiest Meeker athlete, competing in the 100-meter dash, long jump, triple jump and the 4×100-meter relay.
Her first event was the long jump, where she jumped 16-9 1/4 on her third attempt. That effort was the best jump of the competition and her best-ever jump by six inches, until senior Emily Post of Wray popped a 17-0 leap on her fifth attempt.
The same scenario played out in the triple jump, where Doll went 36-7 on her first attempt, breaking the school record and improving on her best jump by almost two feet. Again, Post on her fifth attempt went 37-0 to take the title.
In the 100-meter dash, Doll easily made the finals, but stumbled out of the blocks in the finals to place fifth. She still ran her best time of the season going 12.91 in a tight finish.
The girls’ 4×100-meter relay team of Adrienne Wix, Timbre Shriver, Janae Kindall and Doll made it through to finals in good shape and placed fifth in this quartets best time of the season. The girls’ team missed senior track standout Marki Cook, who pulled a hamstring halfway through the season. Based on her previous times, she would have won or placed high in the sprint events.
Colton Brown earned the boys’ only medal with a sixth-place finish in the high jump as he cleared 6-1.
The boys’ 4×100-meter relay team of Terrence Casias, Bubba Mazzola, Jake Nieslanik, and Toby Casias ran their best time and just missed making the finals.
The 4×800-meter relay team of Terrence Casias, Pat Love, Jared Frantz and Brock Campbell ran to fifth place in a race where all 18 teams started together. Terrence did a great job positioning himself in the leadoff leg and not getting boxed in.
Campbell also qualified in the open 800-meter run, running 2:05.89 to place ninth. This was a great year for the 800 meters with two runners under two minutes and six more just at two minutes.
Toby Casias was the only freshman in the entire field of the 200-meter dash. He ran 24.03, his best time, and was three places out of the finals.
Junior Johnny Wix was seeded fourth in the discus throw and placed fourth. Our region of northwest Colorado produced three of the top four throwers. Wix threw 136-0, short of his personal record of 144-11, and just 13 inches from third place.
The girls tied for eighth place in the state and the combined boys and girls scored 40 points for 13th of the 85 schools which qualified athletes to the state meet. This year’s meet was a great one with 13 new state records, and the first all-classification meet in quite a few years. Coaches for Meeker this year were Andy Goettel, John Strate and Kris Casey. A special thank-you to Kristen Henderson for helping with the triple and long jumpers. Thank you, parents, for your support.

Listen to this post MEEKER I “Successful” is how head coach John Strate described the last regular season track meet hosted by Grand Valley last weekend. “We had a great meet for those that are […]

When science and Christmas collide

Listen to this post MEEKER | The freshman physical science class at Meeker High School put together their annual roller coaster project. According to science instructor Michelle Selle, the project is a cross-curriculum activity that […]

Listen to this post Meeker High School and Barone Middle School Suggested Supply List 2008-2009 Fees must be paid at the first of the year Language Arts: Highlighters-yellow, pink, green, and blue Three packages of […]