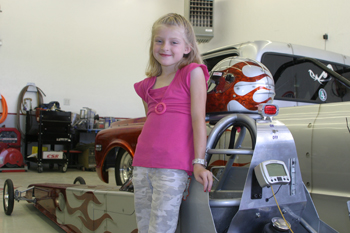 Even daughter Marlena, who is 8, is competing in her first season of the Junior Drag Racing League. 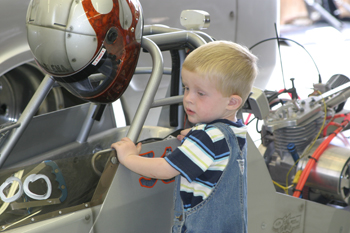 And son Trey, who will be 2 in August, has already shown an interest.
“He’s already into the cars,” Ed said. “It’s kind of a family affair.”
Ed, who owns EMC Plumbing and Heating in Rangely, started drag racing in 1989. This is his second season of racing with his 1970 Chevy pickup. 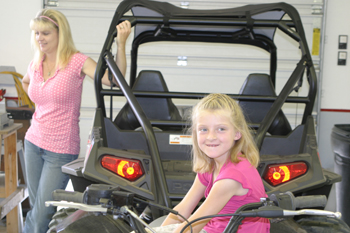 “This has been a good year,” said Ed, who ranks second in points at the Western Colorado Dragway in Grand Junction.
Three weeks ago, he finished second in Douglas, Wyo., with a time of 9.52 seconds at 143 mph. He red-lighted in the final.
He’s not the only Rangely racer who’s been doing well. Jeremy Ahrens, Jerry LeBleu and Wade Rusher have all had their moments.
“We’ve all been doing really well this year,” Ed said. “The Grand Junction guys hate to see us coming.”
They’d better get used to it. There will be another generation of Rangely racers. The Millers’ daughter, Marlena, grew up around the sport.
“She was at the races when she was 2 months old,” Ed said. “She’s been at the races full time since then. She’s never been nervous.”
Like her dad, she feels the need for speed.
“It feels really good,” she said of her dragster, which is half the size of a regular dragster. “It’s a really fast lawnmower,” said Marlena’s mom, Christina.
“It’s the loudest, most obnoxious noise you’ve ever heard,” Ed added.
Asked what she liked best about drag racing, Marlena said, “Beating other people.”
Marlena’s dragster runs, on average, about 50 mph, Ed said. And, typically, her race times range between 12.90 and 13.20 seconds.
“It just kind of depends on the day, the track, the temperature, that sort of thing,” Ed said.
The ages of the junior racers range from 8 to 17.
“After that, you can move up to a big car and go as fast as you want to go,” Ed said. “(Marlena) is the youngest racer right now. She’s been learning from watching.”
Wade and Lynn Rusher have a son, Justin, who will turn 8 in early August, so he can start racing, and Jerry LeBleu’s son, Dylan, will be old enough to start racing next season.
Justin Rusher’s first race will be Aug. 8 in Grand Junction. He turns 8 the day before, Aug. 7.
The Millers’ daughter, Marlena, went out in the second round last weekend during the races at Grand Junction.
“She was doing pretty good up until then,” Ed said.
Ed won the semifinal round Saturday, but was disqualified because of a light violation.
“I didn’t turn my light on,” Ed said. “At night, the track rule is you have to have a light on in the back of the vehicle. I had shut mine off by accident.”
On Sunday, Ed went two rounds in the jackpot race before red lighting.
“I just went a little too soon,” he said.
Ed does most of the work on his vehicle.
“I do my own painting and welding,” he said. “The cars are not cheap to build.”
Of course, the nature of racing is the faster, the better.
“You always want to go faster,” Ed said. “But the faster you go, the more money it takes.”

Fishing tip of the week: Fish can see colors, fact or myth? We know through scientific information that at least some fish see colors; however, we do not know if all fish are capable of […]