Bureau of Land Management’s plans to “zero out” a herd of wild horses is on hold.
That is, until the ruling by a federal judge. 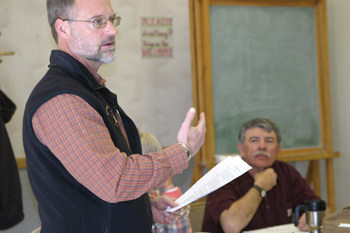 “We should get a final ruling on that in the near future,” said Kent Walter, field manager for the BLM office in Meeker. “But we’re still waiting.”
Walter talked about the plan to remove the wild horse herd during a quarterly report to county commissioners earlier this year.
“The issue there was we were being challenged on whether or not the BLM had the authority to zero out that herd,” Walter said. “That was really the issue.”
The BLM’s plan to zero out the herd was challenged in court by the Colorado Wild Horse and Burro Coalition. The judge who heard the case, apparently, didn’t tip her hand as far as favoring one side or the other.
“The judge didn’t show her cards one way or another,” Walter said. “So, we’ll see. We’re still trying to get the funding in place so, once there is a final ruling, and hopefully it’s in our favor, the removal of the horses will take place.”
Valerie Stanley, a Washington attorney for the Colorado Wild Horse and Burro Coalition, said the court “was just giving us an opportunity to file an amended complaint, so we’re challenging what the government says is the final agency action, which is the environmental assessment.”
The horses the BLM wants removed are in the West Douglas Herd Area, south of Rangely. Habitat, or lack of it, is one reason given for removing the herd.
“We believe we probably have 150 horses in the West Douglas Herd Area,” Walter said, adding the herd repopulates by about 20 percent, on average, per year.
“Because of the topography and the vegetation, there’s very little summer range, which is one of the reasons identified (for zeroing out the herd). The issue is whether the BLM has the authority to remove horses from the herd area. There have been a number of herd areas that have been zeroed out. So it’s not like we set precedent or anything. But this is the first time the BLM has ever been challenged in court, specific to that issue.”
Colorado Wild Horse and Burro Coalition attorney Stanley said it’s difficult to know for sure how many horses are in the area.
“The BLM doesn’t know how many there are, really,” Stanley said. “They do flyovers. They make their decision to remove the horses, then they find out how many are out there.”
If the BLM plan is approved by the judge, Walter said the horses would be removed from the area.
“We gather them and offer them up for adoption,” Walter said. “If they’re not adopted, they eventually end up in long-term care facilities, which are more like sanctuaries.”
Walter said the BLM’s herd management areas provide a more suitable environment for wild horses.
“That’s why we hope the judge rules in our favor, because we think, with our herd management area, we’ve established a really outstanding area for horses to be managed in their natural environment,” Walter said. “Where we do have our herd management area, there’s the habitat, there’s the water. If we can just get the numbers within their management level. That’s the big challenge for the bureau.”
Stanley, attorney for the Colorado Wild Horse and Burro Coalition, disputes the BLM’s reasons for zeroing out the herd.
“They, basically, say we can manage horses wherever we want, and we don’t want to manage them there,” Stanley said. “The horses aren’t bothering them. In fact, the area is so remote … there is very little they could bother. Because the area is so rugged, they are out there acting as wild horses. This means taking them away from their home.
“We have the law on our side, and the BLM is ignoring it,” Stanley said. “So they have played games with this herd for the past 30 years. It’s not like the BLM doesn’t have a problem with horses. They have rounded up 33,000 horses they have removed from public lands and put in holding, that they don’t know what to with, and they claim they don’t have the money to feed them. Why do they need to remove the West Douglas horses is what I want to know?”

RBC | An afternoon work session regarding Rio Blanco County’s Broadband Project was held in Rangely at 1 p.m. on Monday, March 18 after the regular commissioners’ meeting. The work session began with commissioners Rector […]

BLM OKs overburden storage at coal mine north of Meeker

MEEKER I The Bureau of Land Management Northwest District signed a Finding of No Significant Impact and a Decision Record on Friday, approving a coal lease modification to allow Colowyo Coal to store rock and […]

RBC I The Bureau of Land Management’s Northwest Resource Advisory Council will meet Dec. 4 at the Springhill Suites, 236 Main St. in Grand Junction from 8 a.m. to 3 p.m. The meeting is open […]