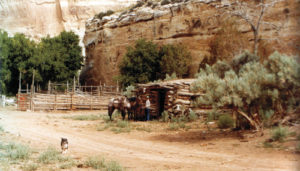 RBC I Growing up in a place called Hell’s Canyon leads to toughness and perseverance. The original Mantle Ranch is in a beautiful but rugged area. There are roads leading to the home now but that wasn’t the case when the Mantles began their cattle operation. Tim and Larue Mantle have lived by the values they learned growing up: hard work, strength and endurance. Married since 1962, they have helped to build one of the most prolific ranches in the area.
Tim’s father, Charlie Mantle, served in the U.S. Cavalry during World War I. After the war, the U.S. government gave homesteads with mineral rights to veterans. At that time, a person could homestead 160 acres and lease and graze two additional 160 acre plots. The 160 acres for grazing was a “right,” not a “privilege,” guaranteed to the homesteader and his or her heirs forever. 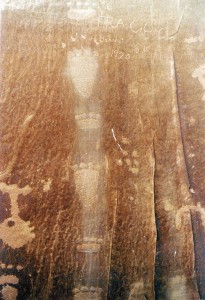 When Mantle got out of the Army in 1919, he decided to homestead a nice, quiet spot in Hell’s Canyon in northwestern Colorado, in an area few others were brave or tough enough to tackle. There, he thought, he and his heirs could live peacefully, and so he began his operation.
The area he chose was definitely isolated – a 30 to 40 mile horseback ride to the nearest town. Supplies were bought once a year in the fall and hauled in when the road was good. The Mantles built the first road in 1926 with a team of horses, shovels and picks. They worked at it for 14 years. The road to the west was built in 1943 when Mr. Chew, their nearest neighbor, had a dozer down in the canyon and offered to build a road between the ranches.
Mrs. Chew helped deliver one of the Mantle children, as the Chew ranch was in between the Mantle homestead and Jensen, Utah. Tim’s mother had to ride horseback to Jensen, then catch an automobile ride into Vernal to reach the nearest medical facility. One baby came a little early, between the Mantle ranch and Jensen, and Mrs. Chew was there to help.
Tim said by the time he came along, his mom just stayed down on the ranch and had him there.
“It was easier then the 40 mile ride out over the mountain and back.” 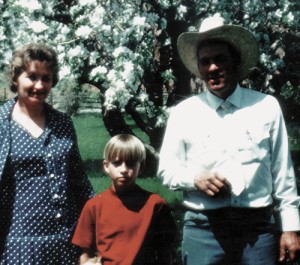 They grew the majority of their food and canned everything, even their meat, to have enough to last the winters when the snow was too deep to ride out. They had a large garden and kept what they could in a cellar for the winter months. Tim recalls getting ready to ride back to high school around Christmas in snow almost to horse’s belly.
The family got a Jeep in 1946, but the snow was still too deep to leave the ranch in wintertimes.
“The snow came the third week of December and came heavy. We wouldn’t be able to drive the jeep out until the end of April,” Tim said.
“It was like growing up in the 1800s,” Tim said. “We didn’t have electricity, water or fuel.” They cut their wood, packed their water and made do with what they had.
Tim learned the importance of hard work and has passed that value on to his family. He and his son rise before the sun and seldom turn in until well after dark.
“It used to be when your horse was worn out the day was over, now you just get more fuel and keep going.” The time on the ranch was good, Tim remembers, “we didn’t know any different.”
He left to attend boarding school at the Wasatch Academy in southern Utah and again to go to college at Colorado A&M. He was there five years before returning to the ranch for good. He married his wife in 1962 and the two lived in the house his father had built in 1938.
“She was the prettiest woman I’d ever seen and I got lucky to get her.”
In 1983 they moved to Piceance Creek. They had some cattle leased with Dick Collins in the area and eventually went into business with Gerald Massey on the square S. They live there now, near their son and daughter-in-law, Dean and Brooke Mantle, and grandsons Bailey and Doak. The grandkids represent the fourth generation of Mantles to work on the ranch.
A living snapshot of our pioneers, the Mantle Ranch is an example of using available resources wisely, a testament to conservation. Without responsible use of natural resources, the land would not have supported nearly a century of use.
Although they sold the Mantle Ranch near the Dinosaur National Monument in 2004, the family still maintains the ranching lifestyle. Bordered on several sides by Federal land, the Mantles have had to fight to maintain the ranch, even though many of its allotments were grandfathered in. They have had to prove their strength again and again through the years, and though it has not been easy, the ranch’s longevity is astonishing.
Four generations of Mantles have lived and worked on the ranch. They, like many others, have had to fight to simply keep a way of life alive.
It is an accomplishment simply to withstand an age of change, but an even greater accomplishment to flourish throughout it. Tim and LaRue Mantle are timeless in their wisdom and priceless in their history.

MEEKER I If you look around at almost any social event during the year in Meeker, chances are good the Meeker Lions Club is there, helping out, bartending at this weekend’s After Birth Ball or […]

Learning to live with MS

MEEKER | Tisha Joslin Reiger comes out to greet me on her front porch with a warm welcome. She leans on a cane and moves with the kind of painful caution you’d expect from an […]