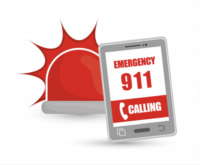 In 2018 the Colorado Public Utilities Commission (PUC) began negotiations with vendors to develop and install a statewide Emergency Services Internet Protocol Network (ESInet) system that will accommodate NG911 and geospatial location technology. Centurylink was awarded the contract in January 2019 and released new 911 tariffs and a timetable for installation throughout the State of Colorado. Currently Centurylink is the only company offering 911 service.

ESInet is a separate internet designed for emergency services and is the technical backbone of the NG911 system. ESInet is a critical first step toward Next-Generation 911. The network is broadband-enabled supporting the transmission of video, images and other bandwidth-intensive data files that would choke narrowband systems. ESInets enable the sharing of emergency data between PSAPs—public safety answering point—which is a call center responsible for answering calls to an emergency telephone number for police, fire and EMS services. A PSAP facility runs 24 hours a day passing 911 calls on to public or private safety agencies), expanding the possibilities of collaborative emergency response across the nation. Next Generation 911 modernizes the infrastructure to accommodate how the public communicates today—largely through mobile and digital devices. NG911 allows the public to send digital data from other transmitting devices such as wearable medical devices, vehicle crash data, video, RTT, building security/fire systems and more. NG911 provides many things today’s 911 system cannot.

Rio Blanco County has the smallest population base with two separate 911 Authorities (911 boards), along with being the smallest population base in the state with two dispatch centers (Rangely and Rio Blanco County Sheriff’s Department/Meeker) managing an overall small volume of calls. Together both dispatch center budgets total approximately $1,000,000. Together both PSAPS have on hand approximately $250,000.

In preparation for these changes, over the next 2-3 years the Rio Blanco County GIS will clean and correct addresses that do not conform to standard addressing guidelines in order to meet the standard of 98% accuracy matching addresses and MSAS (Master Street Addressing Guide) Data. A county wide Addressing Ordinance will need to be adopted by both towns and the County to stay in compliance.

At this time no decisions were made. Attendees plan to take the information back to their respective organization or boards and go over their options. The Town of Rangely has hired a third-party consultant, using grant money, to give them a different perspective on this important decision that will need to be made in the near future.