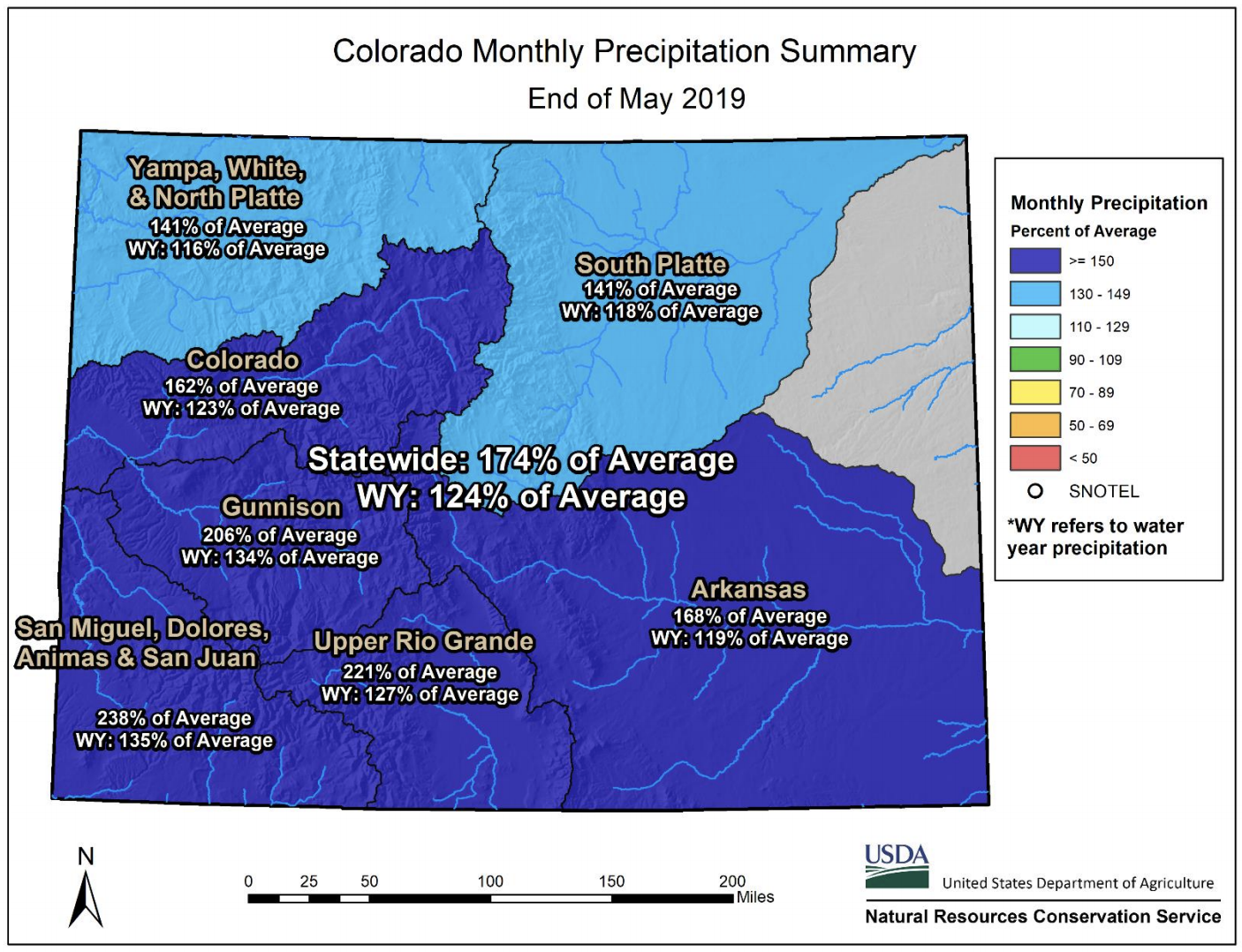 RBC | Spring and summer conditions are emerging slowly in Colorado’s high country. Highlighting one snapshot of these conditions, mountain snowpack monitoring stations across Colorado observed an average increase of 1.4 inches of snow water equivalent, equal to about one foot or more of snow depth, from one storm system during May 20 through May 24. Spring storms such as these are generally normal and often occur twice during the snowmelt season, but usually come earlier in the spring. As of June 1, statewide snowpack stands at 511 percent of normal. The last time statewide snowpack was this high was in 2011 when conditions were much the same as this year. However when focusing in on the basin scale, most individual basins’ current snowpack most closely compares with 1995, particularly in the southern and western basins. In 1995 snowpack peaked higher compared to this year. This year snowpack peaked at 134% of statewide normal.

“May was a particularly wet month, the second wettest month of the year at 174 percent of normal statewide. This coupled with the cool temperatures have aided mountain snowpack to persist later than normal,” commented Brian Domonkos, Colorado snow survey supervisor.

In fact, this spring has exhibited one of the slowest snowmelt rates in many years. With May’s above normal statewide precipitation the year-to-date totals are now 124 percent of average, correspondingly all major basins in Colorado are above average. The combined Yampa, White and North Platte maintains the lowest percent of average in the state at 116. Reservoir storage remains generally low in anticipation of rising streamflows as rivers have yet to peak.

“Below normal reservoir levels will help in absorbing above normal streamflows,” says Domonkos.

Based on forecasts from previous months and the well above average May precipitation, it is anticipated that most rivers in the state will observe above average April through July streamflows. Many streamflow forecast points across western and southern Colorado are expected to produce in the general range of 130 to 150 percent of average seasonal streamflows. In the northern half of the state spring and summer flows are expected to be lower relative to southern Colorado but still at near and mostly above average volumes. It has been a unique snowmelt runoff season so far and the patterns have been variable across the state. Cool temperatures and continued snow accumulation have delayed snowmelt longer than normal across much of Colorado. With the days getting longer and warmer the potential for accelerated snowmelt and corresponding increases in streamflow are possible to occur over the coming weeks. These elevated streamflow levels will likely bring a substantial portion of the seasonal streamflow from a water supply standpoint, but also may have other implications as well. With the potential for high flows also comes an increased risk of flooding and more hazardous conditions for recreation on or near rivers and streams. With rapid changes possible in both the mountains and rivers throughout June, it will be worth paying close attention to local conditions because of the wide variety of potential impacts.

Including Rio Blanco County, all state watersheds above normal

Listen to this post RBC I Including the Yampa and White River Basin, all Colorado river basins reported above-normal snow water equivalent as of the last day of 2015.

Listen to this post RBC | After a below normal December, Colorado’s snowpack is approaching a pivotal point during the winter. Snowpack in the Yampa, White and North Platte basins is above normal at 104 percent […]

Rifle area snow not yet stable

Listen to this post RIFLE I Recent and heavy snowfall has prompted visitors to get out and enjoy winter on the Rifle Ranger District, especially the areas open for snowmobiling. However, current conditions are extremely […]